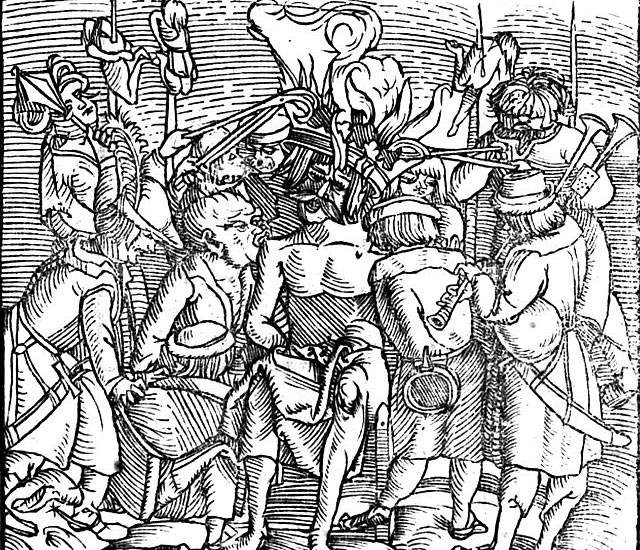 History has taught us that committing high treason is a sure fire way to get tortured and executed in the most excruciating ways. Of course, this isn’t a problem if you actually manage to succeed in overthrowing a ruler or monarch, but those who fail are made an example of in the worst ways possible. Such was the case of György Dózsa, a Hungarian soldier of fortune who led a peasants’ revolt against the kingdom’s nobility in 1514. Despite achieving some early decisive victories against the Hungarian army, the revolution was eventually suppressed with force and Dózsa captured.

He was condemned to sit on a heated smoldering iron throne with a heated iron crown on his head and a heated scepter in his hand (mocking at his ambition to be king). While Dózsa was suffering, a procession of 9 fellow rebels, who had been starved beforehand, were led to such throne. In the lead was Dózsa’s younger brother, Gergely, who was cut in three before Dózsa despite Dózsa asking for Gergely to be spared. Next, executioners removed hot pliers from fire and forced them into Dózsa’s skin. After pulling flesh from him, the remaining rebels were ordered to bite where the hot iron had been inserted and to swallow the flesh. Those who refused, about 3 or 4, were simply cut up which prompted the remaining rebels to do as commanded. In the end, Dózsa died on the throne of iron from the damage that was inflicted while the rebels who obeyed were let go without further harm.

In February 1531, Richard Roose worked as a cook to Bishop John Fisher when he was accused of having poisoned a dinner meant for the Bishop. As it turned out, Bishop Fisher had no appetite that day, so the food was only eaten by his guests, two of whom died. The rest suffered from the side effects for the rest of their lives.

After his arrest, Richard Roose claimed he’d only added a laxative to the meal as a practical joke and had no intention of harming or killing anyone. He was not believed, and was sentenced to death by boiling. He was repeatedly lifted and lowered into a cauldron of boiling water until until he died.

According to a contemporary account, the sight of this never before seen form of torture and the sounds of his screams caused pregnant women to faint and have to be carried away.

Alcaide Melec was a Moroccan governor under emperor Moulay Ishmael in the early 18th century. In addition to being charged with being one of the chief rebels in a rebellion incited by one of the emperor’s sons, the empress was angry over his beheading of one of her cousins. The emperor sought out a carpenter to administer his idea of a just punishment – sawing Alcaide Melec in half.

He was taken by mule to his place of execution, a public square, where thousands of his relatives and members of his tribe were gathered. To their horror, Alcaide Melec “was strapped onto a board, and placed upon a sawbench, his arms and legs fastened.” The executioners started to saw him from the head down, but the empress’s sons demanded they begin from the groin and move upwards, otherwise he would die too quickly. Under the terrible screams of Melec and his relatives, thus began his execution. Once they had sawed him up to the navel, they pulled out the saw in order to commence from the other side. Melec is said to have been still conscious, asking for some water. His friends, though, thought it best to hasten his demise and shorten his sufferings, and the executioners went on, sawing him from skull to navel so he fell apart. In the process, chunks of flesh were ripped out by the saw’s teeth, causing blood to splatter everywhere, thus making the execution quite unbearable to watch.”

Known as the Werewolf of Bedburg, Peter Stumpp was accused of, and confessed to (under torture), being a serial killer and cannibal and having killed and eaten 14 children, among others. He claimed to be a practitioner of black magic from a young age, and to have received a magical belt from the Devil, which allowed him to transform into a wolf when worn. He was also accused of engaging in incestuous relationships with his daughter and a relative, for which they were also sentenced to death.

One of the most brutal on record, the execution of Peter Stummp and his daughter and mistress occurred on October 31, 1589. From Wikipedia, “he was put to a wheel, where “flesh was torn from his body”, in ten places, with red-hot pincers, followed by his arms and legs. Then his limbs were broken with the blunt side of an axehead to prevent him from returning from the grave, before he was beheaded and his body burned on a pyre. His daughter and mistress had already been flayed and strangled and were burned along with Stumpp’s body. As a warning against similar behavior, local authorities erected a pole with the torture wheel and the figure of a wolf on it, and at the very top they placed Peter Stumpp’s severed head.”

Leaders of the Munster Rebellion

The Munster rebellion was a movement by followers of Anabaptism to establish a theocracy in Munster, Germany. The three leaders of the rebellion were Jan van Leiden, Bernhard Krechting and Bernhard Knipperdolling. After the siege and fall of Munster, the three men were captured, charged with heretical and treasonous crimes, and sentenced to death.

On the day of their execution, January 22, 1536, the men were attached to a pole, secured by spiked collars around their necks, and one by one, had the flesh ripped from their bodies with burning hot tongs. Their sentence required a full hour of torture before their tongues were ripped out, and they were finally killed by a “burning dagger” plunged into their hearts. Each of their bodies was placed in a metal cage and hung from the steeple of St. Lambert’s church in Munster. Their remains were displayed there for decades before finally being removed. The cages still hang there today.