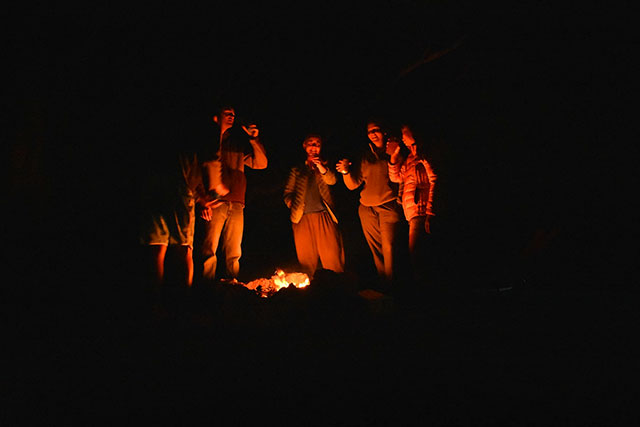 So, a few years back it was that blissful time right when the last semester of college was finally over and it was time for summer. For us, summer meant getting fucked up and making memories, preferably at the same time.

My four friends (Liz, Patrick, Jamie, Sophie) and I decided we should definitely all go camping one night. We live in California and agreed that there is no better way to kick off the start of summer time than to drive up to Lake Tahoe to go camping and trip balls. All of us are at least a little into drugs, so you have five college stoners, some of us being psychedelic enthusiasts as well. All of us had tried acid before, except Sophie, who had before had only partaken in the sticky icky green, but was really interested in LSD.

It was early June and it was fucking beautiful out. The drive there was amazing, it was a clear and sunny day with a slight breeze. Once we finally arrived at our camp site, we spent a good half hour not even talking to each other and just admiring the view. It was around 3 P.M when we had set everything up. We had our tents, blankets, pillows, snacks, and other random shit we wanted to bring with us, and of course, some real good LSD that Jamie and I had saved over from a few months before.

After sitting around talking about past acid experiences while smoking a few joints, we all agreed we were ready to drop. Sophie was a bit apprehensive at first, but then curiosity got the best of her and she was in. I don’t remember exactly how much everyone took, but I know I had 300 mics. and everyone else had at least180.

We’re all having an amazing time. There’s just this big great synergy between all of us. We were euphoric, running around through the woods, exploring, yelling and laughing until our sides hurt, it was like being a little kid again. Everything is warping and wavy, the clouds are swirling and morphing and the trees are swaying back and forth in a beautiful psychedelic dance. It had started getting dark and we wandered off pretty far from our camp site, so we started heading back. Liz and I lit a fire and gathered a bunch of blankets near it so we could all sit around and just chill out.

Then Patrick says something pretty unexpected, “Hey, this may sound odd, but my friend was telling me about having an orgy on LSD and—” Liz cuts him off, “Yes. I’m in.” These two are now grinning from ear to ear, their faces shifting around and looking just like oil painting. They stare at Jamie, Sophie, and I apprehensively waiting for our response. “Why not,” Jamie pipes in. I’m fucking hoping to God that Sophie agrees, because I had such a big crush on this girl. She laughs and kind of shrugs and agrees to join. I’m just staring at a flower growing in the ground, thinking OhMyFuckingSweetJesusIsThisReallyHappening.

Are you down?” Liz asks. I grin and say “Fuck it, sure.” My friends cheer, I can feel the LSD fueled excitement coursing through my veins and in the atmosphere, but it was probably just my boner. We carelessly throw a bunch of blankets and pillows over the ground and honestly, I can’t remember what happened after that. One minute we were sitting around the fire talking, then the next minute we’re all naked and on top of each other.

You guys, you have no idea how fucking amazing this was. Think about the best sex you ever had and now multiply that by 100. There were fractals all around me. There were little outlines of fractals and crazy geometric patterns painted over my friends’ skin. The euphoria was so intense, a few times we had to just stop and lie back for a few moments to catch our breath and calm down because we were laughing so hard. It felt like I was being tickled all over, but I never wanted it to end. It was like all our energy and emotions came together as one and I could just feel everyone’s energy and it was just so magical. Everything was magnified and my heart was beating so fast I thought it was going to bounce out of my chest. Jamie later told me he started getting into weird thought loops the middle of it, so then without thinking he just yelled, “this is not the time for an existential crisis, this is the time to FUCK.”

It was beautiful. Just absolutely beautiful. My friends and I still refer to it as thatnight and when we trip together we always laugh about that experience. That night also made me realize I was in love with Sophie and believe it or not, we’re now engaged!