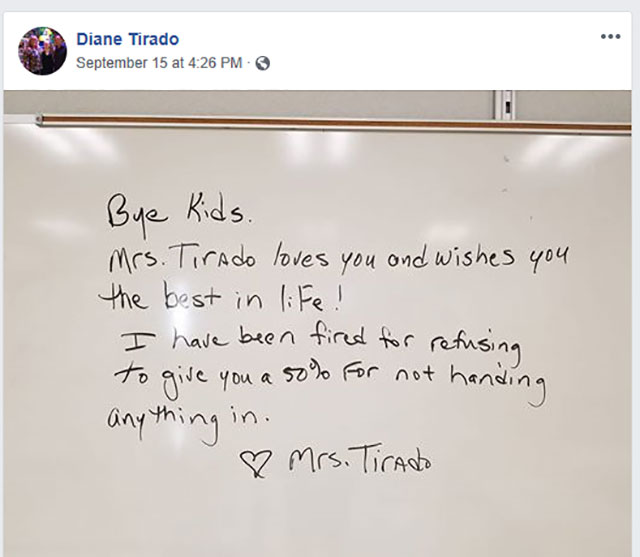 A teacher in Florida said she was fired for refusing to give students a minimum 50 per cent credit on assignments they never completed.

Diane Tirado has been a teacher for over 17 years and began teaching Grade 8 at a school in Port St. Lucie since the start of the school year

However, she said she was fired midway through September for not giving students a half credit, even though they didn’t complete their work.

“If there’s nothing to grade, how can I give somebody a 50 per cent?” Tirado told local CBS12 News.

The 52-year-old explained she had given her students two weeks to complete a project, with some of the students failing to hand the assignment in.

Tirado discovered the “no zero” policy in the West Gate student and parent handbook after many of her students did not complete the assignment. The handbook showed a grading rubric with columns labeled as “Grade,” “Percent,” “Grade Point Average” and “Definition” from left to right. Letter grade A is between 90-100 points, B is 80-89, C is 70-79, D is 60-69, F is 50-59 and incomplete is 0.

Below the rubric in red uppercase letters said: “NO ZEROS- LOWEST POSSIBLE GRADE IS 50%.”

The teacher said she asked the administration department about how to handle grading for a student who doesn’t turn in their assignment.

Tirado was fired on Sept. 14, and was not provided a cause of termination in a letter she received from the principal. Apparently this was because she’s a new hire and on probation. The teacher was also unable to say goodbye to her students, so she left a note on a chalkboard to explain why she was no longer their teacher.

“Bye Kids, Mrs. Tirado loves you and wishes you the best in life! I have been fired for refusing to give you a 50% for not handing anything in. Love Mrs. Tirado,” the note reads.

However, a spokesperson for the school district said there’s no district policy forbidding teachers from giving a zero grade.

“The District’s Uniform Grading System utilizes letter grades A-F, numerical grades 100-0 and grade point averages from 4-0,” the district said in the statement. “Some classroom teachers and school faculties have discussed the range of points for work submitted in each grading category. A zero is noted on the scale for work not attempted or work that is incomplete.” 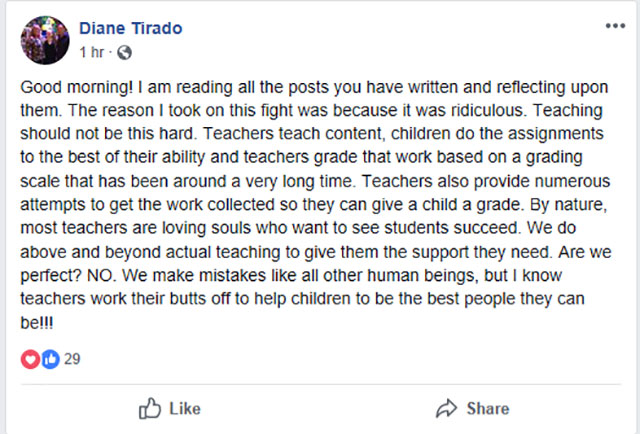