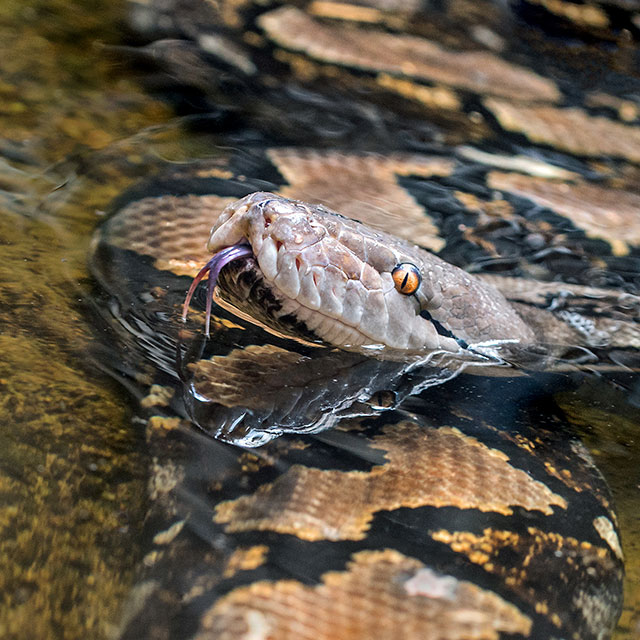 A missing Indonesian woman was found dead inside the belly of a 23-foot-long python, village officials said.

Wa Tiba, 54, was last heard from on Thursday before she went to check on her vegetable garden near her village on Muna Island in central Indonesia.

Her family and others villagers went looking for her on Friday but found just her belongings, including her sandals and machete, the village chief, Faris, told the AP. About 165 feet from these belongings, the search party found a snake with a bloated body. They promptly killed the snake and carried it back to the village.

“When they cut open the snake’s belly, they found Tiba’s body still intact with all her clothes”

“She was swallowed first from her head.”

To kill their prey, reticulated pythons wrap themselves around an animal and crush it, causing it to suffocate or go into cardiac arrest.

Reticulated pythons are the longest snakes in the world and are widespread in Indonesia as well as other parts of Southeast Asia. These creatures, which can reach lengths of more than 25 feet and weigh more than 120 pounds, use their incredible size to squeeze their prey to death before swallowing it whole and digesting it over the course of days or even weeks.

They regularly kill and eat creatures about a quarter of their own size, including monkeys and pigs, but reports of humans being killed by these pythons are rare. However, this was the second attack of a human by a python in Indonesia in a little over a year.

A similar incident that took place in March 2017, a 25-year-old farmer was swallowed whole by a python in West Sulawesi province while he was harvesting his crops.