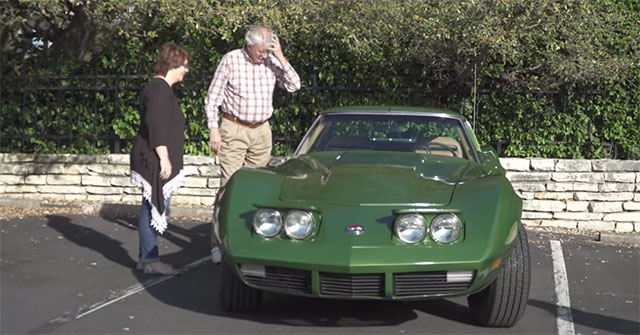 Janis Higgins was a child when she met the man who would become her father. Just a few weeks before he asked Janis’s mom to marry him, he sold his beloved green 1973 Corvette Stingray to support his new wife and two stepchildren, Janis and her brother.

Forty years later, Janis is a successful businesswoman and she decided it was time to repay what her stepfather sacrificed. Together with her other family members, Janis planned a surprise for her unsuspecting stepfather.

In a video we see Janis and her dad heading across a parking lot after enjoying a family brunch. Dad immediately spots a gorgeous green muscle car parked in the lot a short distance away. He starts pointing out the different features to his family, explaining that it was exactly like the car he had.

He spends several moments happily admiring the car, but it’s not until Janis calls him to the back to take a look at the license plate that we understand the true depths of a daughter’s gratitude. The license plate reads, “YDHT,” which Janis sweetly explained means “you didn’t have to.”

She holds out the keys to the man who gave up so much in order to provide for her and her brother.

“My dad is an amazing man,” she said. “He gave so much even when he didn’t have to! We are so thankful to give him this car back!