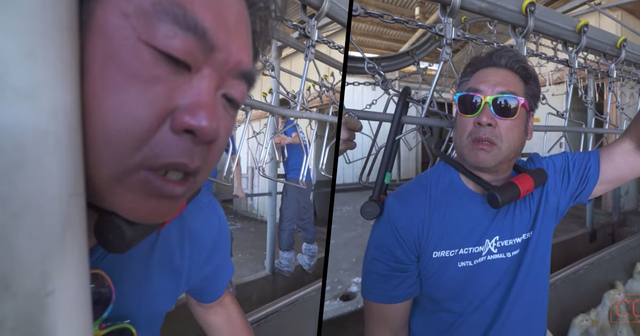 An animal rights activist decided to chain himself to a slaughter machine in protest at an animal farm, but things did not exactly go to plan.

Thomas Chiang was part of a team from animal rights group Direct Action Everywhere that stormed Reichardt Farm, a duck farm in Petaluma, California, chaining themselves to machines and hoping to make a difference with respect to animal rights.

Chiang says he doesn’t know who turned the machine back on. “I think whoever the manager was, whoever was working there, was extremely upset that we were disrupting his business,” the activist explained, but his head ended up being dragged into a pole, crushing his skull, “almost decapitating my head from my neck”.

“I was feeling my life leave my body, as I was struggling to get out of that lock,” he explained, but fortunately, after escaping the lock and hospital, Thomas Chiang was told that his injuries will heal.

Meanwhile, a spokesperson from Reichardt said that the incident was an accident; according to them, the machine was turned on by an employee not at the premises at the time, and was unaware the protestors were chained to it.

Thomas Chiang is still deciding whether or not to file a police report.