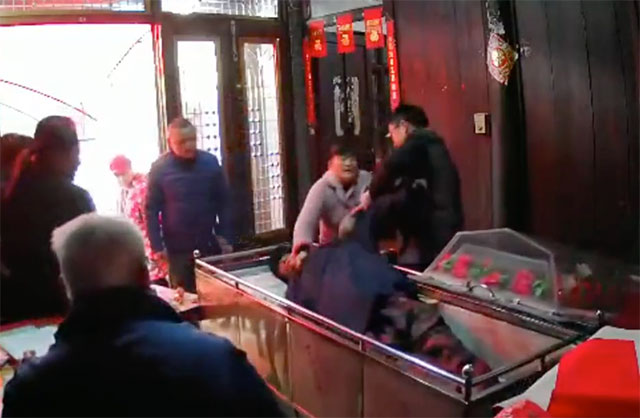 A dead man’s children vented their rage at him for abandoning them and their mother 40 years ago by slapping him dragging his body out of his coffin at his funeral.

In the video a man and a woman could be seen opening the coffin and dragging the corpse out. They even slapped the man’s face a few times after opening the lid of the coffin. After leaving their father’s body on the floor, they berate him for almost a minute

Villagers claimed that the man had a son and a daughter before he passed away, but had abandoned them more than 40 years ago to live with his girlfriend in the same village.

The children were then single-handedly brought up by their mother, the villagers added.

After he passed away, his girlfriend then contacted his children, and showed them his death certificate.

She also requested them to pay for his funeral costs.

The children were infuriated, as they felt it was unreasonable to expect them to help the man after he died, especially since he caused them much pain and suffering while he was alive.