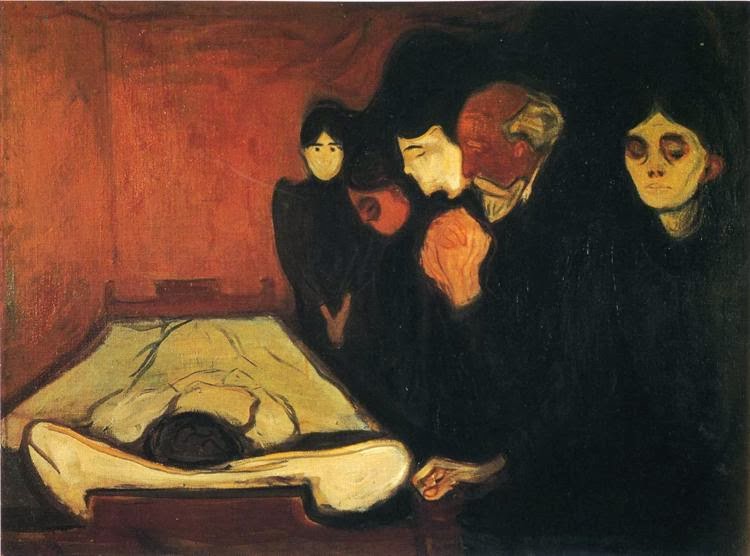 1. "I know you have come to kill me. Shoot coward, you are only going to kill a man." Facing his assassin, Mario Teran, a Bolivian soldier. Ernesto "Che" Guevara

2. Leonardo da Vinci was also overly modest, saying, “I have offended God and mankind because my work did not reach the quality it should have.” I guess the Mona Lisa isn’t good enough?

4. "Go on, get out – last words are for fools who haven’t said enough." To his housekeeper, who urged him to tell her his last words so she could write them down for posterity. –Karl Marx, revolutionary, d. 1883

5. "KHAQQ calling Itasca. We must be on you, but cannot see you. Gas is running low." Last radio communication before her disappearance. Amelia Earhart

7. George Orwell’s last written words were, “At fifty, everyone has the face he deserves.” He died at age 46.

9. Philosopher Jean-Paul Sartre turned to his partner Simone de Beauvoir and said, “I love you very much, my dear Beaver.”

11. Rainer Maria Rilke said, “I don’t want the doctor’s death. I want to have my own freedom.”

12. Nostradamus predicted, “Tomorrow, at sunrise, I shall no longer be here.” He was right.

13. Author Vladimir Nabokov was also an entomologist, particularly interested in butterflies. His last words: “A certain butterfly is already on the wing.”

15. Marie Antoinette stepped on her executioner’s foot on her way to the guillotine. Her last words: “Pardonnez-moi, monsieur.” (Monsieur, I beg your pardon)

16. Richard B. Mellon was a multimillionaire. He was the President of Alcoa, and he and his brother Andrew had a little game of Tag going. The weird thing was, this game of Tag lasted for like seven decades. When Richard was on his deathbed, he called his brother over and whispered, “Last tag.” Poor Andrew remained “It” for four years, until he died.

17. When Harriet Tubman was dying in 1913, she gathered her family around and they sang together. Her last words were, “Swing low, sweet chariot.”

18. When Sir Isaac Newton died, he was humble. He said, “I don’t know what I may seem to the world. But as to myself I seem to have been only like a boy playing on the seashore and diverting myself now and then in finding a smoother pebble or a prettier shell than the ordinary, whilst the great ocean of truth lay all undiscovered before me.”

20. How were the receipts today at Madison Square Garden? – P. T. Barnum

21. Drummer Buddy Rich died after surgery in 1987. As he was being prepped for surgery, a nurse asked him, “Is there anything you can’t take?” Rich replied, “Yeah, country music.”

22. Johnny Ace, an R&B singer, died in 1954 while playing with a pistol during a break in his concert set. His last words were, “I’ll show you that it won’t shoot.”

23. Richard Feynman, a physicist, author, musician, professor, and traveler, died in Los Angeles in 1988. His last words? “This dying is boring.”

24. As Benjamin Franklin lay dying at the age of 84, his daughter told him to change position in bed so he could breathe more easily. Franklin’s last words were, “A dying man can do nothing easy.”

25. Albert Abraham Michelson was the first person to measure the speed of light and was the first American to win a Nobel Prize for physics. Even as he was dying at age 78, he was measuring light. He wrote in his log: “The following is a report on the measurement of the velocity of light made at the Irvine Ranch, near Santa Ana, California, during the period of September 1929 to—.”

26. Thomas B. Moran was a pickpocket, known by the nickname “Butterfingers.” He reportedly stole as many as 50,000 wallets in his career. He died in Miami in 1971, and his last words were, “I’ve never forgiven that smart-alecky reporter who named me Butterfingers. To me, it’s not funny.”

27. Murderer James W. Rodgers was put in front of a firing squad in Utah and asked if he had a last request. He replied, “Bring me a bullet-proof vest.”

28. Charles “Lucky” Luciano was a mob leader who helped the U.S. work with the Sicilian Mafia during World War II in exchange for a reduced prison sentence. His last words were, “Tell Georgie I want to get in the movies one way or another.” And it worked! His life story is told in the movies Lucky Luciano, The Last Testament of Lucky Luciano, and many more. He also appears as a character in HBO’s Boardwalk Empire.

29. John Arthur Spenkelink was executed in Florida in 1979. He spent his final days writing these last words on various pieces of mail: “Capital punishment means those without the capital get the punishment.”

30. Convicted murderer Thomas J. Grasso used his last words to complain about his last meal. He said, “I did not get my Spaghetti-O’s; I got spaghetti. I want the press to know this.”

31. Sir Arthur Conan Doyle, who wrote the Sherlock Holmes stories, died at age 71 in his garden. He turned to his wife and said, “You are wonderful,” then clutched his chest and died.

32. Writer T.S. Eliot was only able to whisper one word as he died: “Valerie,” the name of his wife.

33. Actor and comedian W.C. Fields died in 1946. He last words: “God damn the whole friggin’ world and everyone in it but you, Carlotta.” He was speaking to Carlotta Monti, his longtime mistress.

34. Percy Grainger was an Australian composer who, with his dying words, told his wife Ella, “You’re the only one I like.”

35. Actor Michael Landon, best known for Little House on the Prairie and Highway to Heaven, died of cancer in 1991. His family gathered around his bed, and his son said it was time to move on. Landon said, “You’re right. It’s time. I love you all.”

36. Football coach Vince Lombardi died of cancer in 1970. As he died, Lombardi turned to his wife Marie and said, “Happy anniversary. I love you.”

37. O.O. McIntyre was an American reporter. He died at age 53, and spoke his last words to his wife Maybelle: “Snooks, will you please turn this way. I like to look at your face.”

40. Humphrey Bogart’s wife Lauren Bacall had to leave the hospital to pick up their kids. Bogart said, “Goodbye, kid. Hurry back.” Not quite, “Here’s looking at you, kid,” but close.

41. Before Ernest Hemingway committed suicide, he told his wife Mary, “Goodnight my kitten.”

42. Donald O’Connor was a singer, dancer, and actor. He also hosted the Academy Awards in 1954. O’Connor died at age 78 with his family gathered around him. He joked, “I’d like to thank the Academy for my lifetime achievement award that I will eventually get.” He still hasn’t gotten one.

43. Pulitzer Prize-winning playwright Eugene O’Neill was born in a room at the Broadway Hotel on what is now Times Square. He died at age 65 in a Boston hotel. His last words? “I knew it! I knew it! Born in a hotel room and, goddamn it, dying in a hotel room.”

44. Jack Soo was an actor on the TV series Barney Miller. On the show, there was a running gag about Soo’s character making crappy coffee in the office. Soo developed cancer of the esophagus, and when was being wheeled into an operating room, he joked to Barney Millerco-star Hal Linden, “It must have been the coffee.” In a tribute episode, cast members raised coffee cups in Soo’s memory.

45. Josephine Baker knew how to party. She sang, danced, and acted. She adopted a dozen kids and lived in Paris. On the last night of her life, she left a party being held in her honor, saying, “Oh, you young people act like old men. You are no fun.”

46. Charles Gussman was a writer and TV announcer, who wrote the pilot episode of Days of Our Lives, among other shows. As he became ill, he said he wanted his last words to be memorable. When he daughter reminded him of this, he gently removed his oxygen mask and whispered: “And now for a final word from our sponsor—.”

47. When Groucho Marx was dying, he let out one last quip: “This is no way to live!”

48. Groucho’s brother Leonard, who was better known as Chico Marx, gave instructions to his wife as his last words: “Remember, Honey, don’t forget what I told you. Put in my coffin a deck of cards, a mashie niblick, and a pretty blonde.” For the record, a “mashie niblick” is a kind of golf club.

49. Wilson Mizner is best known for his bon mots, though he was a successful playwright. He’s known for the line, "Be nice to people on the way up because you’ll meet the same people on the way down." When Mizner was on his deathbed, a priest said, “I’m sure you want to talk to me.” Mizner told the priest, “Why should I talk to you? I’ve just been talking to your boss.”

50. As he was dying, Alfred Hitchcock said, “One never knows the ending. One has to die to know exactly what happens after death, although Catholics have their hopes.”

51. Beethoven’s last recorded words were "Pity, pity—too late!", as the dying composer was told of a gift of twelve bottles of wine from his publisher

52. Vladimir Ilych Lenin’s last words were, “Good dog.” (Technically, he said “Vot sobaka.”) He said this to a dog that brought him a dead bird.

53. Blues guitarist Leadbelly said, “Doctor, if I put this here guitar down now, I ain’t never gonna wake up.” And he was right.

54. Thomas Fantet de Lagny was a mathematician. On his deathbed, he was asked, “What is the square of 12?” His last words: “One hundred and forty-four.”

55. "I am still alive!" Stabbed to death by his own guards – Gaius Caligula, Roman Emperor,

56. Sir Winston Churchill’s last words were, “I’m bored with it all.”

57. Actress Joan Crawford yelled at her housekeeper, who was praying as Crawford died. Crawford said, “Damn it! Don’t you dare ask God to help me!”

58. Bo Diddley died giving a thumbs-up as he listened to the song “Walk Around Heaven.” His last word was “Wow.”

60. Emily Dickinson’s last words were, “I must go in, for the fog is rising.”

63. Surgeon Joseph Henry Green was checking his own pulse as he lay dying. His last word: “Stopped.”

65. This is the last of earth! I am content. – John Quincy Adams, US President