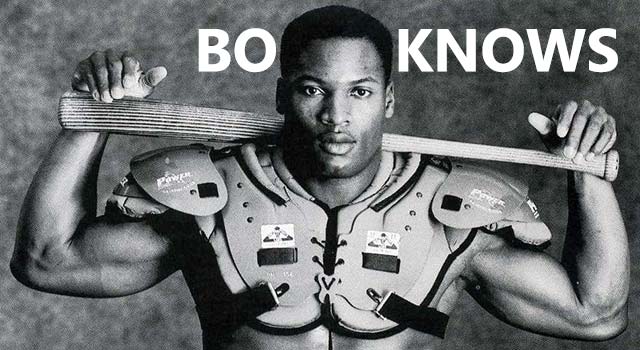 Before the hate mail comes in I’d first like to clarify that I greatly respect Bo Jackson and think he’s an incredible athlete. However, sometimes pure athleticism doesn’t directly translate on the field or in the stat sheet. I always enjoyed watching Jackson play and marveled at his strength and speed, but sometimes there’s more to becoming an all-around player at your sport.

Somewhere along the way Bo turned into a mythic hero, instead of simply a gifted athlete. ESPN went so far as to crown him with the Greatest Athlete of All Time award. Pretty surprising considering he only played 8 seasons in the MLB and 4 in the NFL.

I’d also like to point out I don’t analyze or give much weight to statistics gained below the top level — the pros. Therefore, arguments stating college numbers don’t really mean much to me. Using that logic you can say Tim Tebow, Vince Young, or Maurice Clarett are some of the greatest football players of all time.

A quick glance and these players all had pretty comparable seasons, especially Player A and B. Ok, enough with the suspense, Player A is Bo Jackson’s best season in 1989 which resulted in his only All Star appearance. Player B is Adam Jones’ 2013 season. Though Jones is a very good player and one of the young stars in the league, I don’t think anyone would be quick to label him G.O.A.T. As an avid baseball fan, and tortured San Diego Padre fan, I’d prefer for players to have a higher batting than more steals — but that’s just me.

To put it into perspective, Player C is the popular Hunter Pence and his stats last year. Though these players were carefully chosen because of their similarities, there were still a handful of players who had better seasons last year than Bo Jackson’s best year.

Admittedly, Jackson never played an entire season in the NFL and the lowered statistics reflect that. However, there are typical season thresholds we create to separate the “elite” running backs — often, 1000 yards rushing, 10 touchdowns, and averaging near 100 yards per game.

Spoiler Alert: Bo Jackson never crossed any of those thresholds.

Bo’s best season, again in 1989, he rushed for 950 yards and 4 touchdowns in 11 games. Fairly unremarkable numbers, even for a mediocre running back. It’s also important to note that football was a different game than it is today, often relying more heavily on running than passing.

This NFL season, which isn’t even over yet, 5 running backs have already rushed for more yards and 16 have more touchdowns.

I didn’t write this to knock an athlete or intentionally slander a great name. I wrote this as an attempt to ground some people’s mythic perceptions of an amazing talent. Playing two major professional sports still remains one of the hardest things to do, and we may never seen another two-sport athlete again.