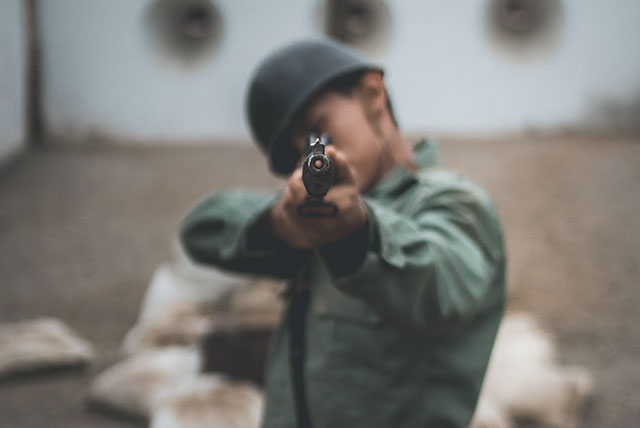 1. Shot in the arm when I was young when I got caught in the middle of a drive by shooting.

You know in the movies where a gun goes off and there’s a sudden look of shock on the victim’s face before he looks at the wound? That’s very accurate. I did not feel any pain or anything. I heard the gunshot and felt a tight pressure in my arm. I looked and saw the wound and how much blood I was losing, and the next thing I know I’m in the hospital.”

2. I got shot through the thigh with a .45, it burned like a motherfucker. The bullet went through the bone completely and the tendons pulled everything out of place, my leg was about 4 inches shorter than the other. Trying to move it was absolute agony, I was praying to pass out but never did

3. I was shot with Ak-47 to the leg. Felt like a baseball bat hit me; but with no pain. This was followed by a buzzing feeling for 5-10 seconds then the severe achy pain set in. Once I got back, I was diagnosed with a spiral fracture. Less painful than I thought it would be, but it was still up there!

4. About 4 years ago I was struck by 4 rounds from machine gun fire, one actually skipped off my body armor right into my left bicep. Honestly did not feel pain when I got hit, just this weird wave of feeling hot and wet on my left side. The pain definitely came after once a tourniquet was applied.

5. I was shot in left foot when I was seventeen. At first I thought it was a bee sting because it sounded like bees flying by. 2 seconds later I realized something was wrong. The bee noises were bullets flying by. It felt like a hot fire poker along the path of the bullet. We were camping and like an hour and a half to a hospital. The burning lasted the entire time until morphine got in. Was in a walking boot for months due to tendon and nerve damage. No bones were damaged but my foot is still numb on top due to nerve damage and it always hurts. I always feel it and if anything hits the entry or exit points or the scar from surgery to remove bullet fragments it send weird tingles up my leg. Definitely changed my life.

6. I was shot 4 times and got shrapnel from a 5th shot in my neck working security at a nightclub. 3 of the bullets were caught in my vest that other staff constantly razzed me about wearing under my t-shirt. The 4th entered my chest between the sternum and shoulder, exited my back above the shoulder blade and lodged in the back panel of the vest and the shrapnel cuts were similar to paper cuts on my neck, they just bled a lot. The gun was a .380 and honestly I felt the ones hit my vest because they were similar to punches and didn’t notice the one actual wound until I realized I couldn’t lift my arm all the way up. It was a numb, sometimes throbbing burning pain. I was treated at the hospital, given painkillers and had to rehab the arm which is back to 100% again. I later found out one of the bullets actually went through someone standing in front of me. Afaik that person is alive and well. All 3 shots into the vest could have been fatal shots to the lungs/heart.

Anyone out there in policing/security/ems etc. just remember a $200-300 vest can save your life.

7. Got shot in the calf with a .22 LR while landscaping about a decade ago. It just felt like a push-pinch like if someone pushed a wasp stinger into my skin and since I was using a weed whacker at the time, I thought it had picked something up and thrown it against my leg. It went numb, and when I looked at the wound it was bleeding way too much to be from random debris. It really only hurt after I started fucking with it to stop the bleeding. If you get shot, don’t look at the wound if at all possible.

The shooter was a German foreign exchange student with surprisingly bad muzzle awareness, trigger safety, et cetera, but since the damage was minor we all laughed it off. Honestly it didn’t hurt that bad, hopefully being shot by a smaller caliber has helped me build my immunity up towards larger bullets.

8. Surprisingly painless compared to what you might expect, I’m not one of those ‘I didn’t even realize I was shot’ people, though I can definitely understand where they’re coming from. The very first thing I felt can only be described as a sudden impact of no sensation, I felt numbness wash over the area, if I had not realized I was about to be shot shortly before I was I could see how I could have easily have been too distracted to notice this immediate response. That feeling then gave way to a horrible burning sensation. It’s a very ‘hot’ pain, it feels the way a very flushed face or a blister feels, but intense and painful and after a little time passes the area around it has this very unexpected achy pain that feels more like what you would expect from being hit with a bat than being shot. And yet I wouldn’t know how I would even rank it in terms of how painful it actually was, the feeling of being shot was seamlessly paired with the adrenaline and wooziness of having REALIZED I was shot and the knowledge that I really couldn’t afford to get shot again. The three intermingled and alternately masked and intensified each other. For a few moments I’d totally forget I had been shot, only for my attention to come back to myself in a lot of pain. I’ve never had to describe it before, my words seem so inadequate, its a very bizarre series of sensations that I imagine is almost never experienced by people in an otherwise clear state of mind. I really cannot understate the significance of the psychological impact it had on me in the moment, which totally distorted my processing of physical sensation.

9. It’s a bit of burning sensation mainly. The quick pierce into your body hurts like hell. Best way I can describe it is that it feels like being continuously poked as if someone is holding multiple sharp pricks to you and pushing in but not stabbing.

Painful as shit, but it’s not an ungodly amount of pain to where you can’t even cope with it if it’s in an area of non importance in your body such as arm or shoulder. Can’t speak of experience from being shot anywhere else.

To be honest ricochets hurt a shit load worse than a direct impact because it can hit you in multiple places instead of just one entrance and/or exit wound would in a direct impact.

10. Smaller caliber shot through the arm. Just a flesh wound, it did bounce off the bone though. It felt like electricity. The only thing that I can relate it to would be hitting a baseball (or anything) wrong with a bat or stick. That’s 80% of the feeling. The initial pain was exactly like that. After pains however were something unique that I can’t relate to anything. It wasn’t until I noticed all the blood that I realized I’d been shot. I was angry for a few seconds then I laughed about it. Then I was more worried about wrapping the wound and coming up with a good lie. 7/10 on the pain scale I’ve had worse but it was not pleasant.

11. I got shot in the foot about 2 years ago with a .45. Went in one side and out the other, pulverized some of the bone too. There was no pain at all. Only knew I was shot because of all the blood. At the hospital about a half hour later it started to hurt a little. Doctor was surprised that I only rated the pain as a 4 out of 10. It hurt a fair bit in the days and weeks after, but never intolerably.

12. I got shrapnel to the shin. It in such a way it looked like a clean fillet of skin down to the bone. It hurt pretty fucking bad, the initial feel was like take a lead pipe to the shin.

A buddy of mine from the same unit but operating out of another FOB took a 7.62MM straight through his upper left arm. From what he told me with the adrenaline and heat it felt a little worse than a bad wasp sting. After the dust off back the medics working on his arm noticed he need his dental check up and continued to patch him up while he got a good teeth cleaning.