A mixed rice bowl that is served in a hot stone pot. An assortment of veggies, protein, and fried egg is combined with red pepper paste and sesame oil. 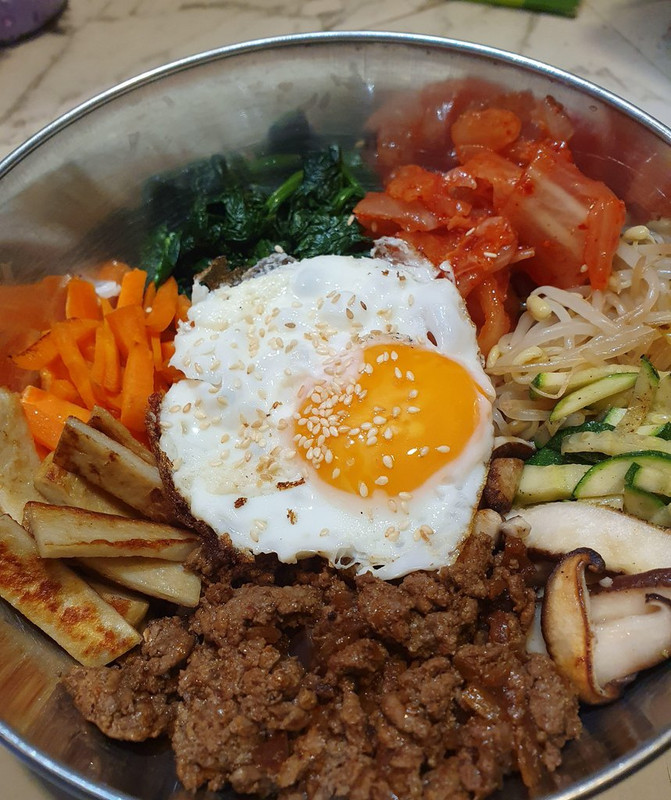 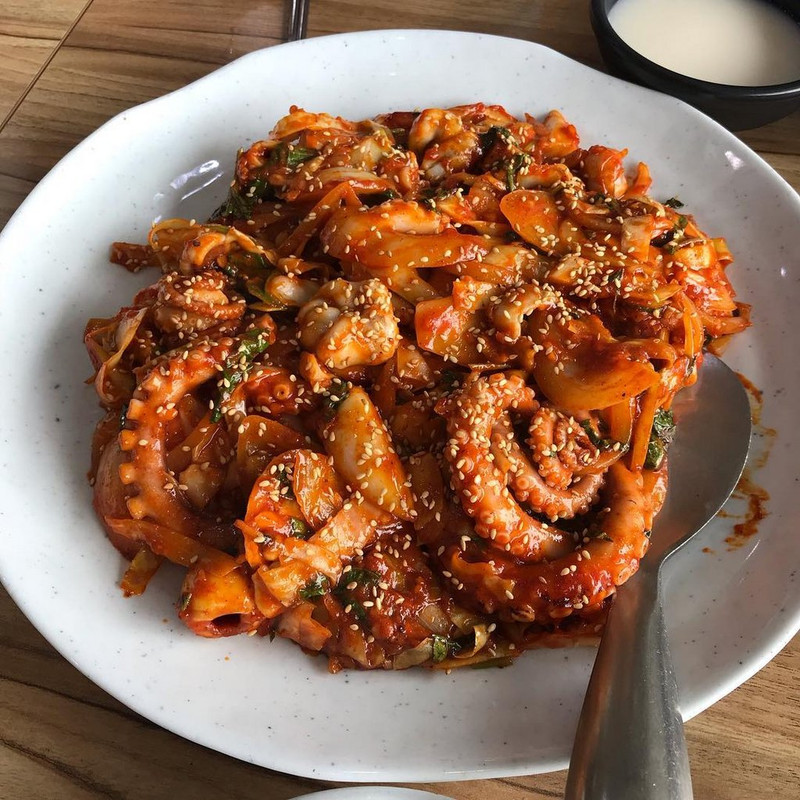 Kimchi, a staple food in Korean cuisine, is a traditional side dish of salted and fermented vegetables, such as napa cabbage and Korean radish, made with a widely varying selection of seasonings, including gochugaru, spring onions, garlic, ginger, and jeotgal. The pickled cabbage is served alongside almost every Korean meal. 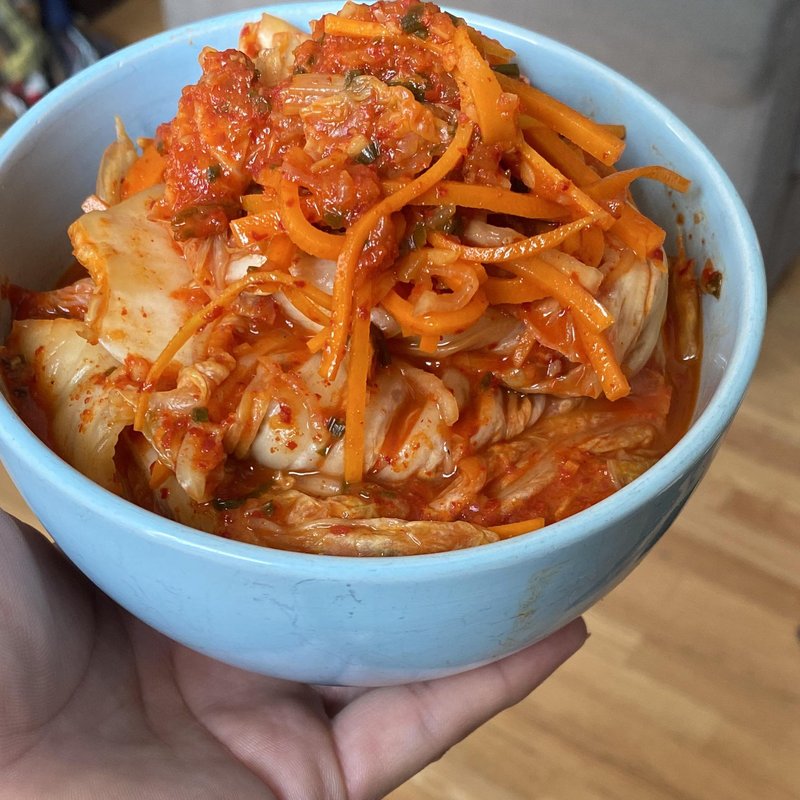 Bulgogi is one of Korea’s most popular beef dishes that is made from thinly sliced sirloin or another prime cut of beef (rib eye). It is usually marinated in a mixture of soy sauce, sesame oil, black pepper, garlic, onions, ginger, and sugar for two to four hours to enhance the flavor and its tenderization 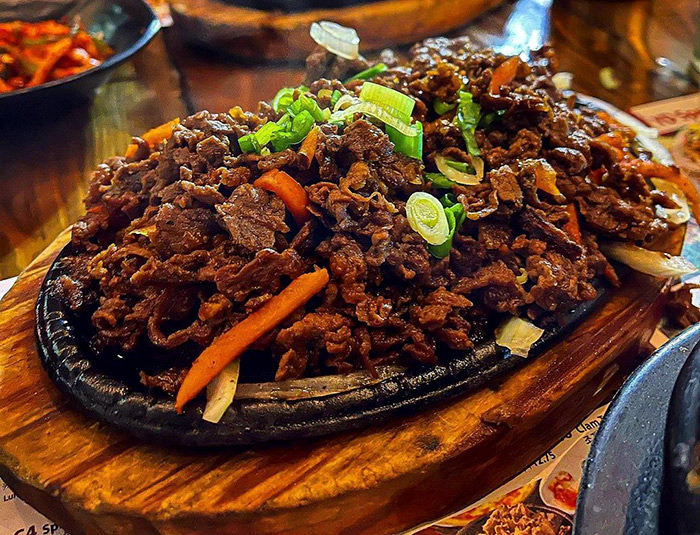 A Korean broth made from ox bones, brisket and other cuts. Seasoning is generally done at the table according to personal taste by adding salt, ground black pepper, red pepper, minced garlic, or chopped spring onions 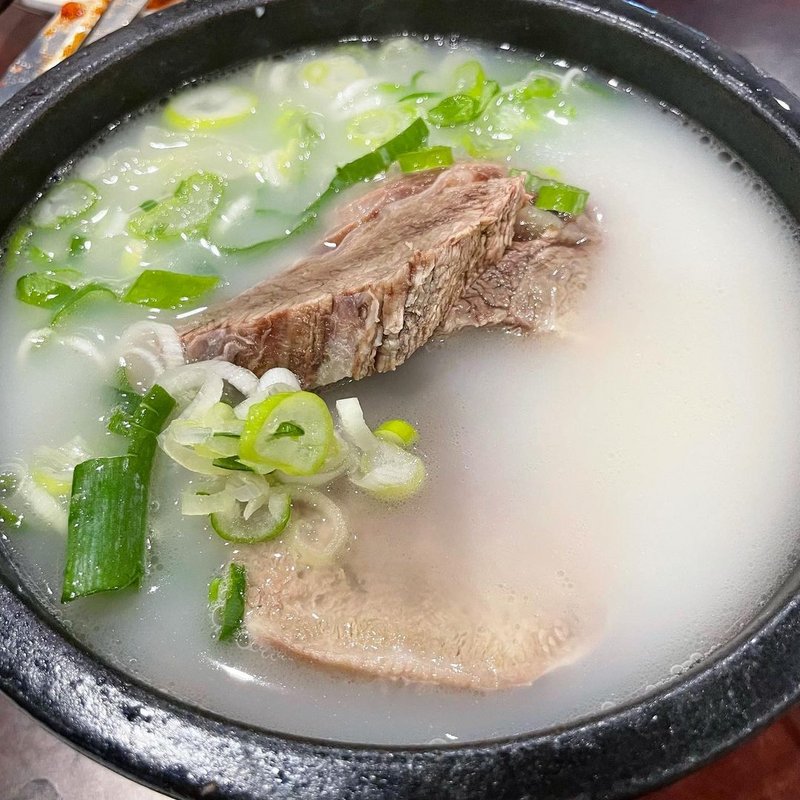 Sondae is a type of blood sausage in Korean cuisine. It is a popular street food in both North and South Korea, generally made by steaming cow or pig’s intestines stuffed with various ingredients

The country’s version of Japanese sushi. It is normally packed with spinach, pickled radish, fish cakes, and sliced omelette. 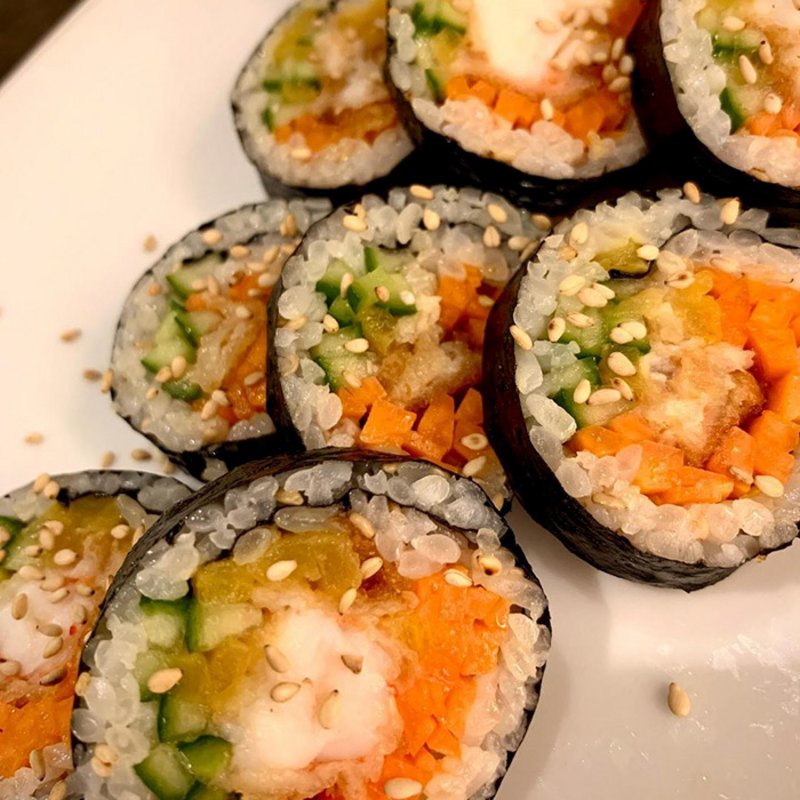 Doenjang jjigae is a staple Korean stew made with doenjang, fermented soybean paste. It is one of the most representative dishes of everyday home-cooked Korean meals.

Korean pancake made with green onions/scallions, served with a mixture of soy sauce & vinegar for its dipping sauce 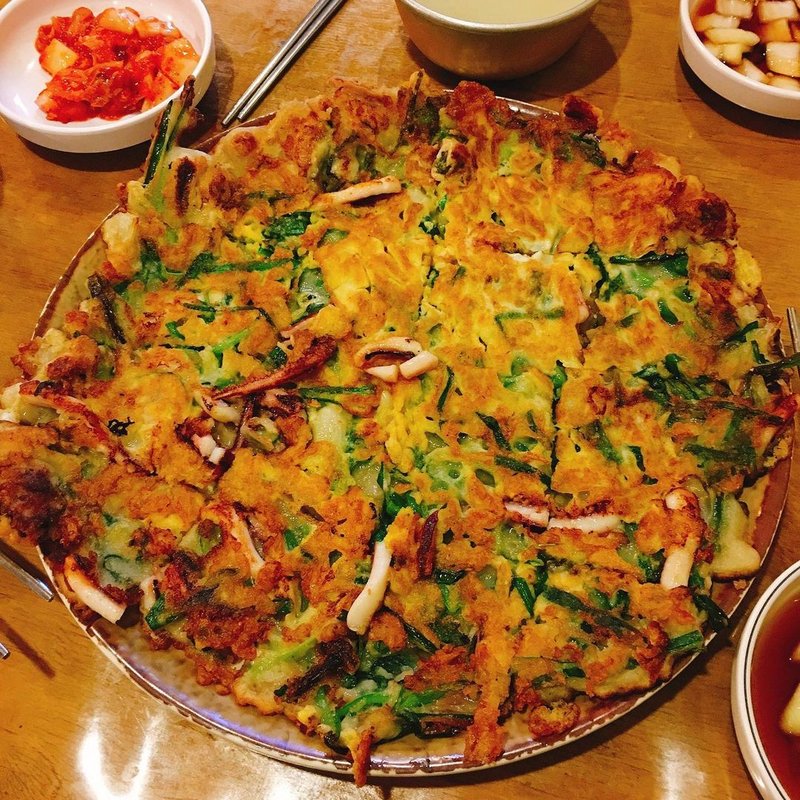 A stew made with silken tofu, spicy broth, and assorted meats and veggies. The bubbling pot poaches the cracked egg on top. 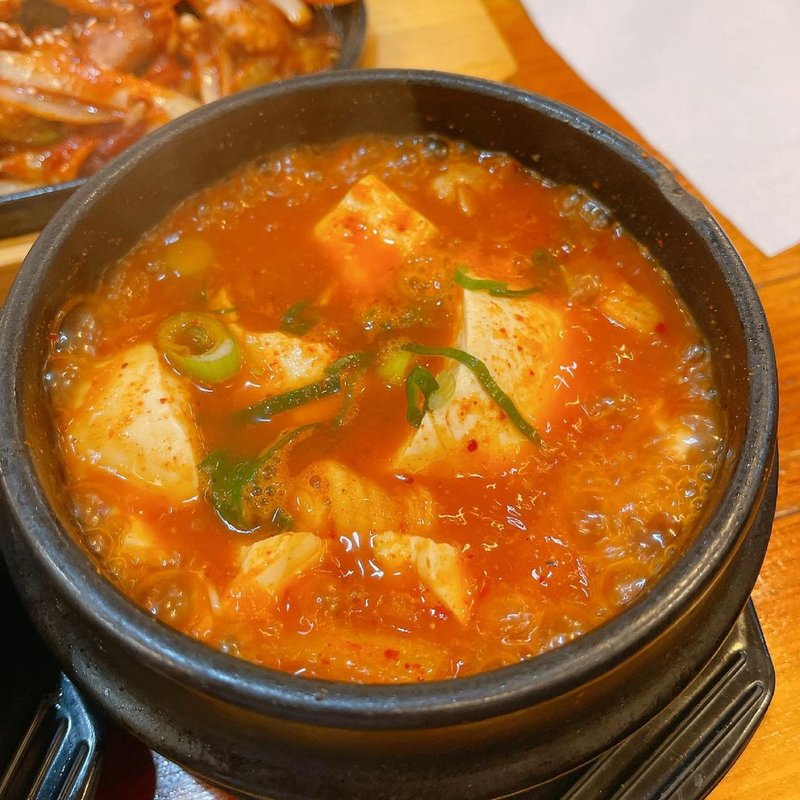 Korean for short rib. It is commonly grilled in a soy sauce marinade or dipped in coarse salt. 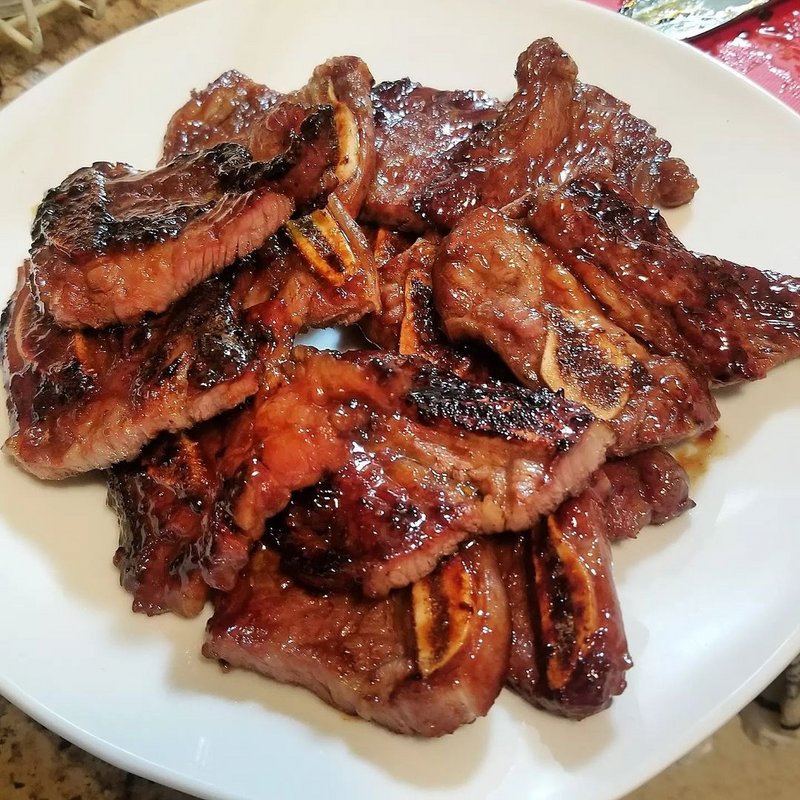 A sweet potato noodle dish that is made with stir fried vegetables, and is flavored with sesame oil and soy sauce. 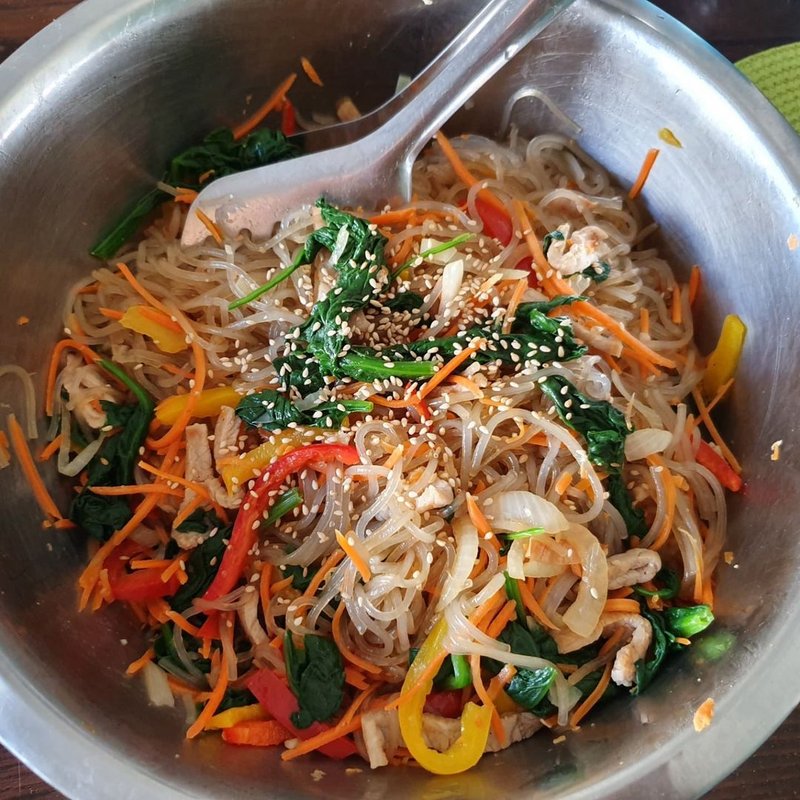 Translates to “Army-base stew.” It originated after the Korean War, when American soldiers donated canned goods to people who had little to eat. The spicy fusion soup incorporates ingredients like hot dogs, ramen, and kimchi. 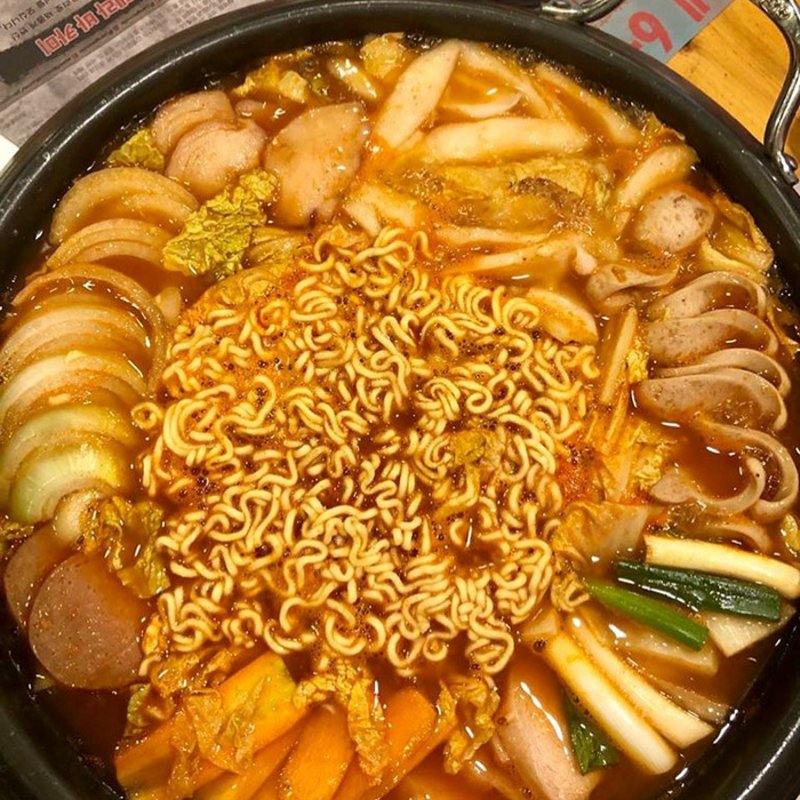