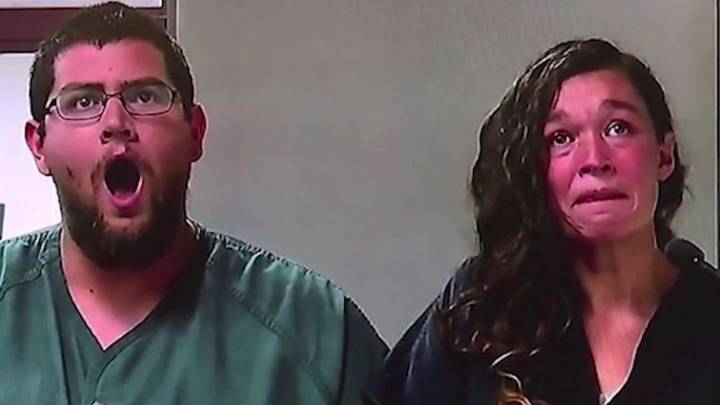 A couple’s reaction after being charged with felony murder and first-degree child abuse after they refused to get help for their 10-month-old child who died of malnutrition and dehydration.

Seth Welch’s jaw dropped when a Kent County judge informed him on the charges of first degree child abuse and murder held a possible life sentence.

Welch called police on Aug. 2 saying he had found his 10-month-old daughter dead in her crib at the family’s Cedar Springs home, according to court records. The responding officer noted in his police report that Mary Anne Welch’s cheeks and eyes were “sunken into her head.”

Welch, 27, and his wife who is also Mary’s mother, Tatiana Fusari, 27, were brought in for questioning where they admitted to noticing their daughter’s skinny appearance as early as a month prior.

Fusari told police they failed to seek medical care for their daughter “for fear of having Child Protective Services called, lack of faith and trust in medical services and religious reasons.”

The autopsy came back indicating the baby girl died from malnutrition and dehydration. Both parents were then taken into custody and remain in Kent County Jail, which is where they were arraigned.

63rd District Court Judge Sara J. Smolenski arraigned the couple together, but she clarified the remainder of their cases would be handled separately. Fusari appeared to be holding onto her husband’s arm throughout the hearing, breaking into sobs as the charges were read.

The pair are highly religious, with Welch regularly posting about his Christian faith on Facebook.

In a recent post, he wrote: "The righteous shall live by faith. It’s God who is sovereign over disease and those sorts of things and, of course, ultimately deaths."

In another post, he wrote: "Shouldn’t we just let the weak die off and let the strong survive?", while in a third, he called doctors. "priesthoods of the medical cult"

On the day of Mary’s dath, he wrote: "Heart is about shattered right now.

"Woke up to Mary dead in her bed this morning – this evening had our children removed and placed on ‘no contact’ because Tati and I are the worst parents ever – Thankfully they are with grandma and grandpa."