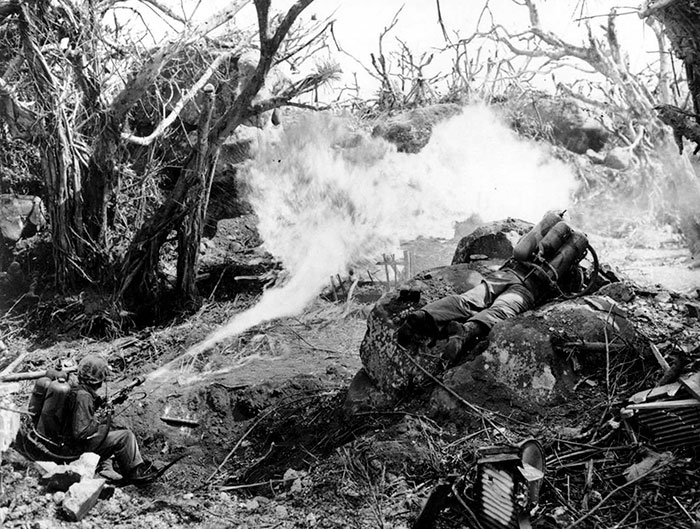 The U.S. M2 flamethrower weighed about 43 pound empty. When fully charged the solider was carrying about 68 pounds of flammable fuel on his back into the battlefield with people desperately trying to shoot him down. If he was lucky a bullet hit him in the chest. If not, and it hit one of the twin fuel tanks, he could die an ugly, painful death.

Effective range for the U.S. M2 flamethrower was only around 65 feet (20m) with a max range of 132 feet (40 m) — provided the wind was favorable — and duration of the fuel pack was in the area of 7–8 seconds. That’s a very limited useful life on the battlefield.

Once empty, the operator had to make his way back from the front lines to have the fuel cylinders refilled and the compressed nitrogen tank (that rode between the fuel tanks) recharged.

Under the cone shaped cap at the end of the firing wand there was a cylindrical ignition cartridge that held about 8 pyrotechnic initiators. Squeezing the trigger ignited one of these burning devices which would ignite the stream of fuel as it flowed past.

How effective was the flamthrower in war?

The flamethrower was an effective weapon in its time when assaulting fortified positions like a bunker or machine gun pit covered with trees and vegetation. The U.S. Marines used it to clear bunkers and fortifications in the Pacific theater in WW-II, as well as caves and tunnels used by the Japanese. In Europe they were used during the Normandy invasion (D-Day) for clearing out the fortifications, bunkers and trenches overlooking the beaches.

The flamethrower remained in the U.S. inventory up to the Vietnam war. It did prove useful for burning VC out of their tunnels in South Vietnam. They usually weren’t the most tactically sound fighters, and the NVA didn’t issue the VC anything nice till every NVA soldier had what they needed. So the VC tunnels around villages and farm fields weren’t usually guarded by well-armed partisans. But this was a war where the press was everywhere, and it didn’t look too good that Americans were burning people alive. Plus, tunnels rats got pretty damn good at wiping out VC with a pistol, a flashlight, and the occasional Facial Reconstruction specialist (German Shepherd).

It was also something of a psychological terror weapon. If you’re a soldier down in a dug-in fighting position with tree trunks or even a concrete wall with firing ports, seeing a flamethrower coming at you would be an instant cure for constipation. Your focus would be to kill him as quickly as possible. Being killed by a bullet was one thing, but the agony of being set on fire was a horrible thought. (Actually the idea of surviving it was worse than dying.)

Why did the flamethower operator have the shortest life span?

Once you actually start turning folks into crispy critters or sucking the air right out their cozy little cave…it kinda draws the attention of their comrades. The machine guns on your flanks, the mortar crew behind the position you are attacking, the sniper posted up about 300 yards away. They stop trying to kill every Marine, and they all start aiming for YOU. Find cover ASAP, because now it’s like the Wild West shooting gallery at Disneyland and you’re the pop up skeleton everybody tries to shoot at once.

And when you are out of fuel…well no island-hopping Marine operation ever had it’s logistics very close to the front line. Now you have to wait for your fellow Marines to advance to your position and start laying down some lead so you can get back to the rear. All while those big fuel tanks stick out to Japanese snipers like a neon sign saying “Aim Here”.

There were not a lot volunteer operators of flamethrowers. According to accounts of the Marine invasions of Tarawa and Iwo Jima, the lifetime of a flamethrower operator in battle was measured in minutes, not days or hours.

Only a handful of flamethrower operators made it more than one campaign. 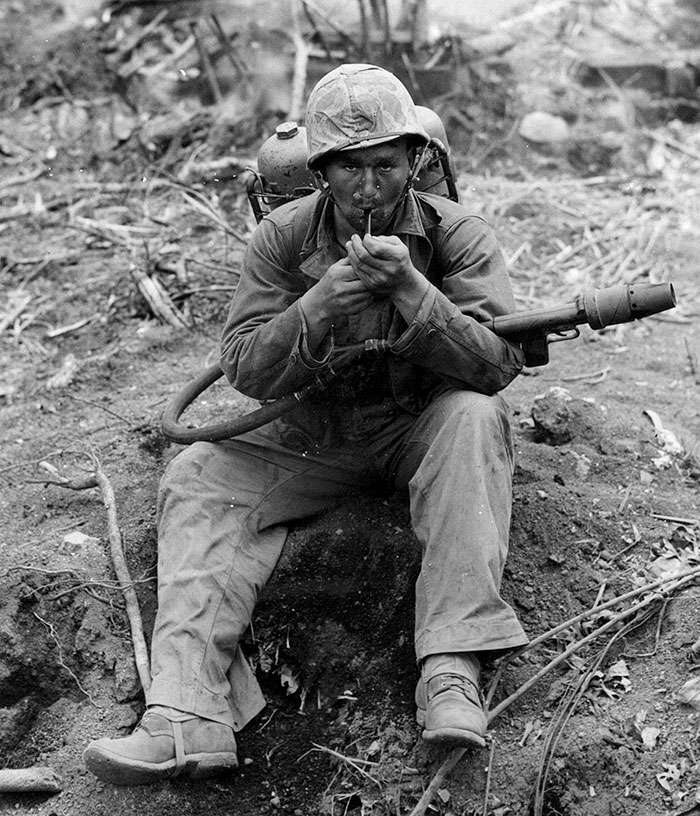 How did soldiers get chosen for flamethrower duty?

The flamethrower was a weapon specifically assigned to those members of the infantry who had the occupational specialty known as Assaultman. Assaultmen are those members of the infantry who use weapons such as rocket launchers, guided anti-tank missiles, various types of explosives, and at one point the flamethrower, which was discontinued by the U.S. Military after the war with Vietnam. Assaultmen are usually designated for this role when their aptitude and vocational testing shows that they have a higher than average competency for understanding things that are mechanical or electronic in functionality.

The military would never realistically assign someone to carry a flamethrower as a means of punishment. That would be arbitrary, somewhat sadistic, and would most likely present a safety risk to other soldiers by giving someone with a history of incompetence or belligerence a weapon as unpredictable as a flamethrower. That being said, I cannot imagine that a competent Assaultman would have ever been too happy about carrying one when a mission required it, given the aforementioned unpredictability of the thing, as well as the fact that the only way to use the thing effectively involved standing upright, exposing oneself to enemy fire whilst carrying two canisters of flammable liquid on one’s back. Maybe it wasn’t punishment but I’ll bet it sure felt that way.

Why is the flamethrower no longer used by the US Military?

Mostly because it’s obsolete. It was a weapon of necessity, not covenience. It did a job that needed to be done, and it came at high cost in lives.

If you want more reasons — the limited capacity, limited range, weight, and extreme hazard the equipment posed to the operator.

It’s primary role to clear bunkers and fortified positions was largely taken over by longer range and more effective weapons — not to mention much safer ones for the operators! Weapons like the M-79 grenade launcher, LAWS rocket and similar lighter weapons had greater range and were safer to use.

So the Pentagon got rid of it as soon as the need was gone. And really, why do you want a flamethrower….when you can use a mother-f’n flame tank!