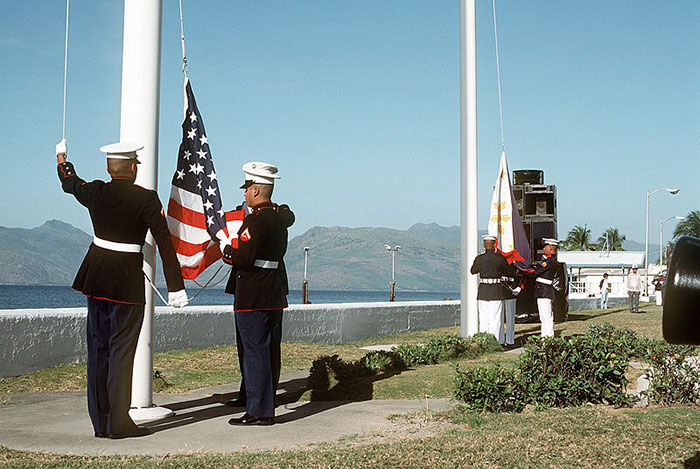 Sadly the US pulling back on it’s military will make the world a more dangerous place.

Currently, the world is enjoying the longest single period  of General Peace ever. Since the end of World War Two, the number of people who have died in a war is now just low, it’s at an all time low.

Part of that has been because the United States military has been so large. So large that many countries don’t bother to build military forces because they know the best military they could field wouldn’t be a match for the United States. So they, in many cases have not bothered trying to match the US military.

In the case of our Allies in NATO and other parts of the Western Alliance, they have been promised that the United States would always come to their defense. So many of those counties have token military forces.

The lead up of the causes of World War I were several. But one of the major factors was over militarization of the major powers. Even countries that were’t major powers often then had military forces much larger then we see around the world today. For example, in 1914 Belgium has 350,000 men in uniform. Today Belgium has about 30,000.

There were about ten major powers in 1914. Most of them had combined Army and Navy forces currently larger than the entire US military. Bear in mind, they all had populations fractions of the current United States.

Those ten major powers went to war in 1914. The results were not a fun period in world history.

20 years later World War Two was fought again by about ten major powers. At the time Japan was a county with about 1% of the economic power of current Japan…. she was still able to build a giant Navy with eight Aircraft carriers and 12 battleships. Not to mention the Imperial Japanese Army and it’s Six million men.

Today the world has about 60 nations with the economic and technical knowledge to build sizable modern military forces. If the American Allies think the promises of defense won’t count for anything, they will build forces to protect themselves. Then their potential enemies and others will do the same.

And modern military forces will include nuclear weapons. Currently there are Nine nuclear powers. There are about 20 nations that currently are not nuclear powers by their choice. The US nuclear deterrent was good enough for them. They can become nuclear powers at will. That list of countries is long. Canada, Germany, Spain, Poland, the Netherlands, Italy, Japan, South Korea, Taiwan, Australia, and South Africa (who gave them up once before). Probably at least a few other NATO/EU powers could be added to that list, as well as a few former Soviet Republics.

A world where there 60 major armed powers…. that’s not going to be a fun world. They will find a way to fight major wars again. If just by accident. Remember, the immediate cause of World War I was a giant political blunder by the German Kaiser when he promised Austria the blank cheque and promptly went on vacation without finding out how the Austrians would use his promise of backing anything they demanded from Serbia. Austria then made demands that Serbia couldn’t agree too.

Then the road to war was quick and direct. Russia Mobilized as they had promised to defend Serbia from Austrian aggression. Austria and Germany then both mobilized in response to the Russians. France mobilized to support Russia. Finally the British had to go to war because France went to war. Later, the Germans got the Ottoman Turks to join the war to help with fighting Russia. Then the Allies got Italy to attack Austria. Later the US was slowly dragged into the war to support the British and French.

BTW, that’s the war with the largest single American battle ever was found. The US put a over a million men into the Meuse-Argonne Offensive. It was a more bloody affair for the US than any single other battle in American history. Americans like to remember Civil War and World War II battles, but not the biggest single battle it ever fought. It’s largely forgotten in the US today. Which is crazy, because while not the only cause…. the American defeat of the Germans in that battle was the proximate cause (final straw as it were) of the collapse of the German Empire.

Anyway, if we end up seeing the United States retreat into itself, the 60 current modem economic powers will start building large military forces again. That’s going to be something like 45 countries with Armies and Air forces of 500,000 men, 35 counties with large Navies with four to six modern aircraft carrier groups. And probably 25 nuclear powers, if not more. And that’s also going to be a world where a country without the technical ability but with large cash reserves will be able to purchase nuclear weapons on the open market.

In such a world, the entire world is in a more dangerous position. That includes the United States.