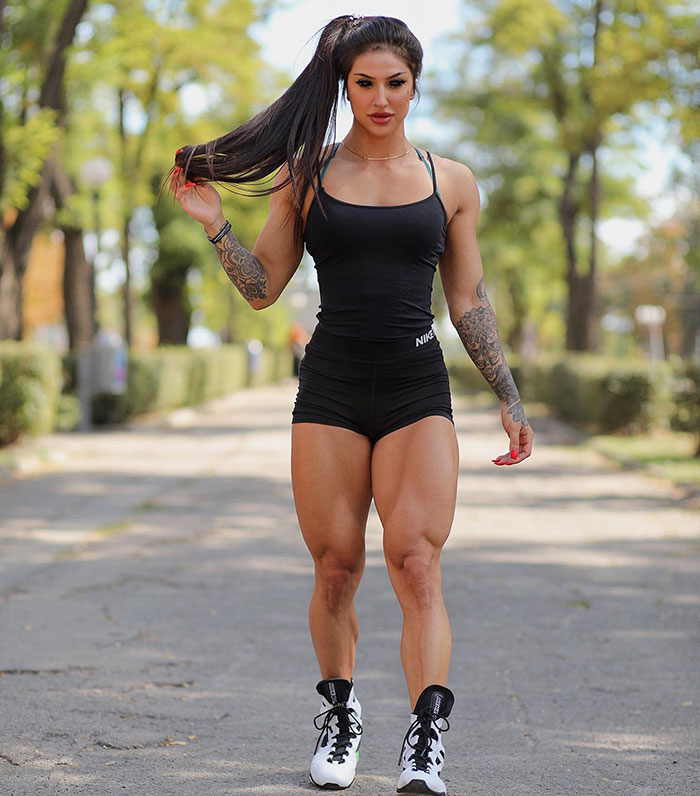 Bakhar Nabieva is a bodybuilder, fitness model and influencer who built a huge following thanks to her ripped physique and monstrous quads.

Bakhar was born in Mingachevir, Azerbaijan and around the age of 5, her family moved to Dnipro, Ukraine.

As a teen Bakhar excelled in basketball and volleyball.

As a kid she was insecure of her skinny body frame, especially her legs. In 2012, Bakhar was inspired to start her fitness journey after seeing Gracyanne Barbosa, a Brazilian fitness model, on a tv show.

She she strives for the Brazilian body type which consist of a small upper body, big thighs and big glutes.

Initially Bakhar, went down the fitness competiton road but soon discovered it wasn’t something she enjoyed. She later moved into the fitness modeling world and has found her calling there.

Bakhar openly admits to taking steroids, but warns against taking it without a doctor’s supervision.

She reveals that one of the biggest side effect from taking steroids has been her voice getting deeper. She says that although before her voice wasn’t all too girly, her voice change has been very significant.

Another side effect that Bakhar noticed from taking steroids is that she became really aggressive. She mentions that she would see a handsome dude on the street and she would want to jump on him. She said that aggression she felt helped her understand what it was like to be a guy.

Besides the voice and the aggression, Bakhar also noticed that she was always angry all the time.

Bakhar reveal that she the steroid use didn’t affect her private area; "I’m ok, I don’t have a dick."

Even though people online have criticized her for looking like a man and sounding like a man, she is ok with that, because she knows she is not everyone’s cup of tea.

Bakhar has an OnlyFans account where she posts implied nudes and explicit photos.

As far as relationships, her previous two boyfriends cheated on her, with the first one claiming that she was getting "too muscular".

Bakhar has an older sister. In an interview she talked about how they were very similar growing up

Before I started going to the gym, we were looking like twins. We both had long hair, but then when we grew up, we completely changed. She’s a fashion designer and I went into fitness. I once tried to took her to gym but she didn’t really like it after I trained her she hated it. We are really different but we we’re not that close as we were before, but still we’re sisters we talk sometimes."

Bakhar says she doesn’t have any women friends and all of her friends are guys because women are too catty and talk behind her back.

I don’t have girlfriends. All my friends are guys, because I feel really comfortable with guys. You can talk whatever you want to and they always give your like honest opinion. With girls, I had a lot of situations when they talk bad behind your back, not all girls, but those I had unfortunately. So all my friends and my best friends are guys and I’ve known them for a long time and they’re with me from the very beginning, so I really really trust them."

Her advice for everyone out there is to listen to yourself, because if she had listened to all the naysayers and critics out there, she wouldn’t be where she is right now.

Bakhar is vocal in support of Ukraine, her home country.

In 2022, she purchased a American Bully XL dog that she named Blu. American bull xl’s are known for the muscular frames and their imposing size. Bakhar says her dog will grow in excess of over 100 pounds. She started an Instagram page for her dog Blu and it already has over 5000 followers.

Bakhar says she loves to listen to R&B when she works out.

‘When I work out I love to listen to R&B, I used to listen to heavy rock but then I stopped because you know I don’t feel as a beast when I listen to R&B. Some people listen to classic music I tried it doesn’t work for me."

Bakhar mentions that she believes fitness models have a shelf life and after her career starts to decline and she becomes less popular, she wants to move into acting and her dream is to be in a Marvel movie.

When asked what message she would relay to her 5 year old self, she responded:

In life you gonna meet a lot of bad people and people are going to drop out of your life and you will meet a small number of people, maybe only 1 person, who loves you and supports you, just the way you are and you need to hold on this person and not let them go.