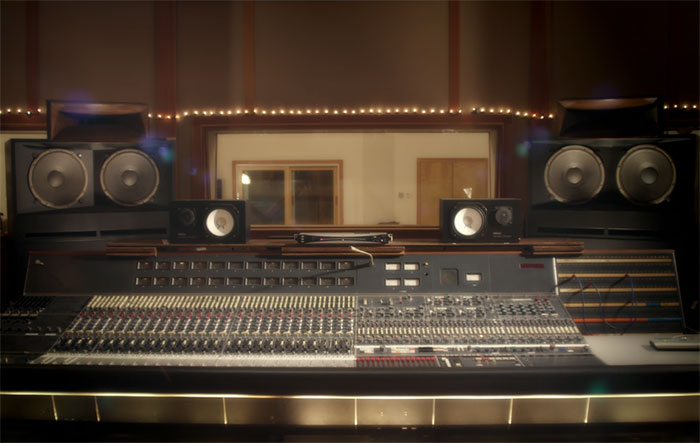 MELISSA BLOCK: Let’s talk about that board. It’s a Neve 8028 soundboard and that was the studio console at Sound City. What was so great about it?

DAVE GROHL: Well, you know, that was a great era for recording equipment. The late ’60s and the ’70s, a lot of this really beautiful equipment was being made and installed into studios around the world and the Neve boards were considered like the Cadillacs of recording consoles.

They’re these really big, behemoth-looking recording desks; they kind of look like they’re from the Enterprise in Star Trek or something like that. They’re like a grayish color, sort of like an old Army tank with lots of knobs, and to any studio geek or gear enthusiast it’s like the coolest toy in the world. But they’re pretty simple. They’re not filled with miles and miles of cable and wires — they’re pretty simple. And what you get when you record on a Neve desk is this really big, warm representation of whatever comes into it. What’s going to come out the other end is this bigger, better version of you. And so it makes you sound real, but it makes you sound really good.

For those of us who aren’t studio geeks, explain what a console does — how it shapes the music that comes through it.

There’s a great example in the film, actually. Butch Vig, who produced Nevermind, is an old friend of mine. I’ve worked with him for years. He did the last Foo Fighters record. He plays in the band Garbage. He’s one of our generation’s great producers, and he explains what the board does. It’s like a big stereo. You take a microphone and you plug it into the console. You sing into the microphone, the sound goes through the cable, into the desk. And in the desk, you can manipulate the sound by making it brighter, giving it more bass, basically like an EQ on your stereo. Then the sound comes out of the desk and into your tape machine or your Pro Tools unit, and then that’s the sound that you get.

Now, different boards do different things to the sound that’s coming through them. An old Neve desk does embellish it in a way that makes it sound sort of bigger or warmer. It doesn’t change the performance but it does enhance the way that it sounds. You know, it’s the difference between listening to an old record on an old stereo versus listening to something off of your iPod. It really suits rock ‘n’ roll. I think musicians like me are drawn to those older desks, not just because they’re legend and lore but also because they do something really specific that is hard to emulate or re-create digitally.