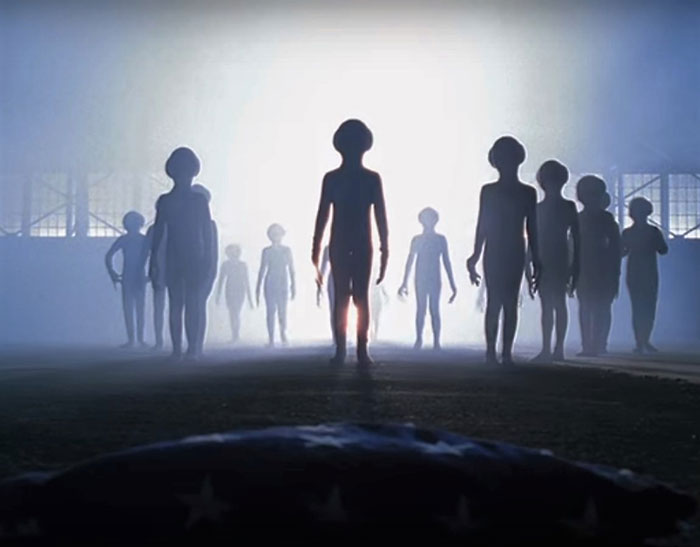 The X-Files plot arc was about a group of people (The Syndicate) who were trying to negotiate with an alien species (The Colonists) that was intent on taking over the world, wiping out humankind in the process.

First contact with the aliens occurred in 1947, when one of their spacecraft crash landed in the desert in New Mexico.

In the face of the inevitability that the superior alien intelligence and technology would ultimately beat them, a small group of powerful men negotiated an agreement that humanity would be allowed to continue in the form of an alien-human hybrid.

The Syndicate spent most of its time helping The Colonists develop the hybrids by keeping them supplied with human foetuses.

However, they were also covertly working on a vaccine that would save humanity from this awful fate.

Unfortunately, The Colonists had lied to The Syndicate about what their plans were.

The Black Oil that was supposed to create a human-alien slave race, was in fact a virus that created aliens inside the human host and their true intention was to wipe out humanity and take the planet for themselves.

The Syndicate’s discovery of this betrayal led The Colonists to develop a race of Super Soldiers to ensure that the colonisation of Earth would not be prevented.

The series ends with the revelation that the alien invasion is due to start in December 2012, the end of the Mayan calendar.

And if you want more details:

1) US government discovers aliens after they crash accidentally in Roswell NM in 1947. The aliens, called here the Greys, are planning on invading Earth and wiping out humanity. In order to save humanity, a shadowing group of military, political, and industrial leaders (called the Syndicate) make a deal with the Greys. Allow them to work FOR the greys, the deal was: The Syndicate use their shadowy government powers to actually help the Greys in preparing for the invasion of earth and in exchange the Greys will allow the syndicate to research on creating a Alien-Human hybrid. This is important because….

2) The Greys main weapon is the Black Oil, which is a semi sentient liquid virus. Is is show early on to be able to enter humans and take over their minds. Essentially the Black Oil is the Grey’s consciousness. This virus is meant to wipe out all of humanity. The syndicate’s deal was to make a hybrid capable of surviving the viral plague the Greys were planning and the Greys would allow these hybridized humans to live on as slaves, thus ensuring humanity will survive in some way.

3) Deal with the devil. So to enure that this deal between the Syndicate and the Greys worked, the Greys gave an alien fetus to the Syndicate for tissue they can use in research. In exchange the top leaders of the syndicate would send one or two of their kids to live off of earth with the Greys, as hostages. This is the CRITICAL back story plot. Fox Mulder’s dad, Bill, was a member of the Syndicate who had doubts about the deal with the Greys, so he didn’t give up a child. The show’s main bad guy and apparent Syndicate leader, the Cigarette Smoking Man (CSM), arranged to have Fox’s sister abducted by the aliens from her own home. Fox saw this and it is what has driven all his voodoo science, paranormal crusading at the FBI.

3) After making the deal the Syndicate begins to do three things:

(A) prepare for the Grey viral plauge and assist the greys in catalouging and finding human test subjects. The 1970s small pox eradication project was one such way that the Syndicate secretly IDed every human on earth and took tissue samples for the Greys to test. The Syndicate also killed or payed off people to cover up the aliens existence. Even the UN, or at least agents there, assisted in keeping the Greys and their plan a secret.

(B) The Syndicate recruited scientist, some of them ex-nazis, to work on the hybrid. They new that eventually the Greys would invade anyway and had to work quickly to get a hybrid who could survive the alien virus oil shit. To this end they conducted even MORE medical experiment and abductions, Scully was one such test subject who was rendered infertile by their experiment among hundreds of more women. There were many programs in many countries; most people probably didn’t know what they were working on and only the top men at the Syndicate understood the whole plan.

(C) In super secret, and unbeknownst to the Greys, the Syndicate also begins work on a vaccine against the alien virus, intended to stop or even usurp the Grey’s invasion plans. All the cooperation, all the assistance, and all the work on the hybrid were to buy as much time as possible to get the vaccine ready.

5) Later on we find the Black Oil, human experimentation, and Alien Bounty hunter stuff weaved in. Oh yes, the Alien Bounty Hunter, their name not mine. He is a SECOND species of alien, not a Grey, who does enforcement work for the Greys. Usually the Greys let the Syndicate handle most of the work. Hell, almost all of it. But for special mission the Greys can’t trust the humans on, or because the humans can’t do it, they send the shape shifting Alien Bounty Hunter to protect their interests. Including things like recovering an accidental release of the Black Oil from another crashed ship, and stopping Mulder’s work of revealing the conspiracy.

6) The movie changed everything. In the X-files movie we get a lot of exposition on the Syndicate and their conspiracy. To wit, the Greys viral plague will be lead by Bees. That’s right, alien-bee hybrids infected with the virus will spread it along agricultural vectors. To assist the outbreak, the Syndicate will use FEMA (in the US at least) to take control of the government, under the banner of trying to help but really to ensure its spread.

But the big twist is, some kids accidentally discover some of the Black Oil in a cave in texas. Only it doesn’t just take over their minds, it turns them into hosts, and new Greys (feral beast Greys who are more animal than anything) grow inside the humans, eating us from the inside out. The Syndicate is shocked, the Greys LIED to them too. The virus wasn’t meant to just take people over, but turn us into husks they can then grow in and burst out of. Also the Black Oil in the case wasn’t from a crashed ship like before, it was ALWAYS there. The Greys were originally from Earth and weren’t colonizing us, but RETURNING HOME.

The Greys never planned on allowing hybrids, and only told the Syndicate they so they would help plan their own destruction. The vaccine the Syndicate was created worked, but only weakly and probably wouldn’t provide the kind of protection they were looking for.

7) So both sides are trying to play off the other. During all this a THIRD alien species, I think, is introduced, The Faceless Resistance (or the faceless here) who mutilated their faces to prevent infection from the Grey’s virus. They fight the Greys, who have equally colonized other planets and wiped out other species. The Faceless try to infiltrate the Syndicate, the Alien Bounty Hunter tries to stop them, its all a mess.

During this the Syndicate arm of “Build a Hybrid” actually pays off. They create a single Alien-Human hybrid who can survive the virus. Only the Faceless attack at this precise moment. It is unclear if the faceless knew the Syndicate was working on an anti-grey vaccine or just thought the Syndicate was actually working for the Greys, but they attacked and killed the Syndicates senior leaders and their families, the Hybrid, and stole the alien fetus, the only alien tissue source the Syndicate had to build another hybrid. CSM and a few others escape.

8) Following the break up of the Syndicate, another group forms who is actually loyal to the Greys. They use unkillable super soldiers (unsure if aliens or just alien tech), to enforce the plan. The show kinds sputters at this point, Mulder was abducted, and some plot holes develop, but it ends with Mulder finding out the date of the invasion was to begin December 2012 from the CSM, who was in hiding after the Faceless destroyed the original syndicate. The invasion was made to be seen as inevitable. The CSM is killed by government agents working for the new, pro-Grey Syndicate, but Mulder managed to accidentally kill the Super Soldier send to kill him and escapes with Skully, armed with the final truth and determined to stop the invasion. So its up the viewer to decide if Mulder would be successful or not in the end.