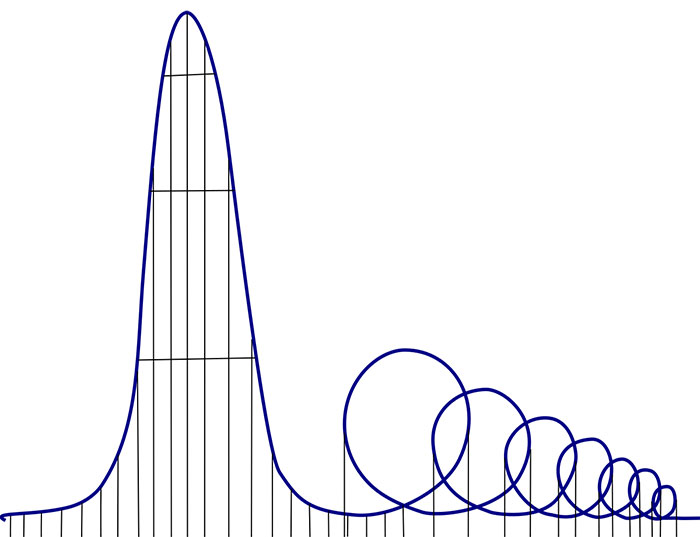 Imagine being at the amusement park, climbing on a roller coaster and… dying. However, it was not an accident, but a form of euthanasia. This comes from the mind of a Lithuanian designer, in 2010, who presented a project called “Euthanasia Coaster”. It is precisely a roller coaster, designed with the aim of giving death, humanly and with “fun”, to those who get on board.

Julijonas Urbonas is a Lithuanian-born student studying for his PhD at the Royal Collage of Art in London. The boy works in an amusement park and, from an early age, has been fascinated by the roller coaster. However, after some time, these attractions began to become more and more “tiring”, being always the usual routine. During his studies he then decided to present a project that was strange and different from the usual ones: a roller coaster of death.

He gave this idea the name of Euthanasia Coaster, a hypnotic death machine that you could only experience once and which, according to the designer, “causes the death of passengers with elegance and euphoria”. Once inside the roller coaster, the passenger is subjected to a series of elements of intensive movement that induce various experiences, from euphoria to thrill. From loss of consciousness to death.

It can accommodate 24 passengers. Once you get on board, there is a slow ascent to the climb. Once at the top, everyone is given the decision to reconsider, stop and safely go back. Once it is decided to continue the race, all subjects must press a button that starts the race.

The Euthanasia Coaster, from what is shown in the project, begins with a fairly steep climb that takes the trolley to a height of 510 meters in about 2 minutes. After that, a descent of 500 meters follows at a speed of 360 km / h, the speed necessary to be able to perform the 7 clothoids (spirals). With each inversion, they reduce the diameter in order to maintain an acceleration equal to 10 g (acceleration of gravity) for about 60 seconds.

Along the way, the blood would stop flowing to the brain, thus causing a lack of oxygen.

Symptoms will be: blurred vision, loss of consciousness and eventually death. It was thought of such a long time to be used inside the roller coaster and so many clothoids as they wanted to have the guarantee of death even for those physically more resistant subjects. Once the ride is over, the trolley will be emptied to make room for other would-be suicides.

Although the idea was to give participants a “nice” death, some neurologists would argue that the death is anything but funny. According to them, one would die in the throes of profound malaise and unbearable retching. Others say instead that death does not come during the race, but rather at the end. In fact, they claim that a sudden stop, after such a speed, would literally make your head explode.