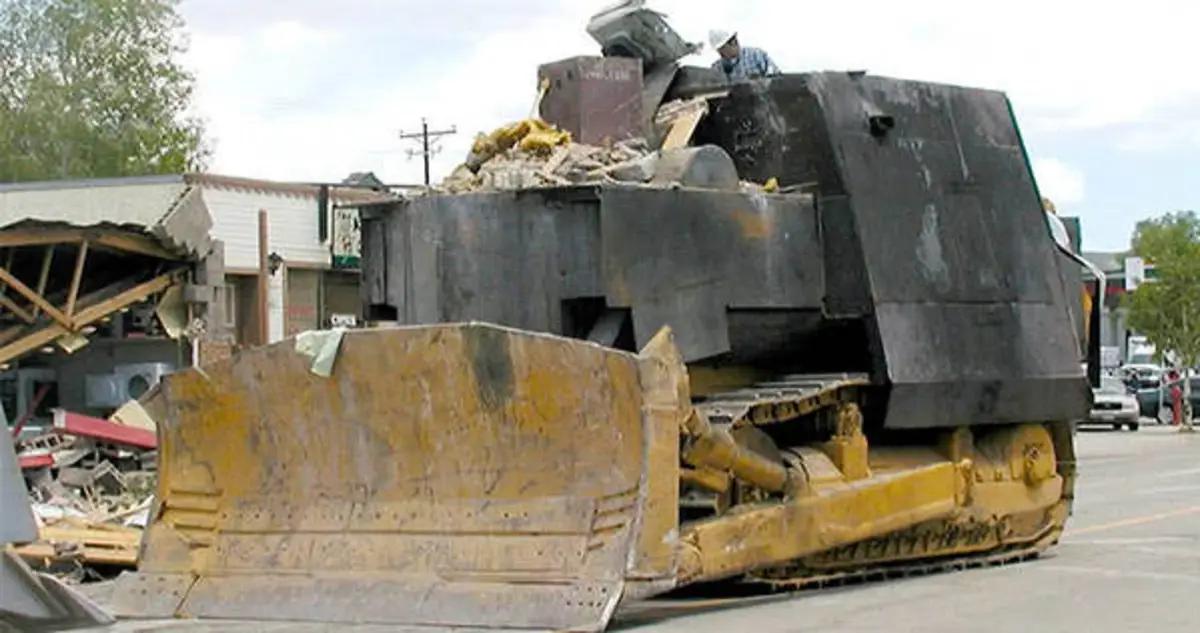 After multiple disputes with his town Marvin Heemeyer constructed a concrete/steel armor-plated bulldozer “Killdozer” to destroy those who had sided against him. His rampage destroyed 13 buildings & was unstoppable by Police/SWAT until the dozer stalled. He killed himself & was the only casualty

Heemeyer’s bulldozer was a modified Komatsu D355A, which he referred to as the "MK Tank" in audio recordings, fitted with makeshift armor plating covering the cabin, engine, and parts of the tracks.

In places, this armor was over 1 foot (30 cm) thick, consisting of 5,000 psi (34 MPa) Quikrete concrete mix sandwiched between sheets of tool steel (acquired from an automotive dealer in Denver), to make ad-hoc composite armor. This made the machine impervious to small arms fire and resistant to explosives. Three external explosions and more than 200 rounds of ammunition fired at the bulldozer had no effect on it.

For visibility, the bulldozer was fitted with several video cameras linked to two monitors mounted on the vehicle’s dashboard. The cameras were protected on the outside by 3-inch (76 mm) shields of clear bulletproof lexan. Compressed-air nozzles were fitted to blow dust away from the video cameras.

Onboard fans and an air conditioner were used to keep Heemeyer cool while driving. He had made three gun-ports, fitted for a .50 caliber rifle, a .308 semi-automatic rifle, and a .22LR rifle, all fitted with a one-half-inch-thick (1.3 cm) steel plate. Heemeyer apparently had no intention of leaving the cabin once he entered it.

One officer dropped a flash-bang grenade down the bulldozer’s exhaust pipe, with no immediate apparent effect. Local and state police, including a SWAT team, walked behind and beside the bulldozer occasionally firing, but the armored bulldozer was impervious to their shots.

Attempts to disable the bulldozer’s cameras with gunfire failed as the bullets were unable to penetrate the 3-inch bullet-resistant plastic. At one point during the rampage, Undersheriff Glenn Trainor managed to climb atop the bulldozer and rode the bulldozer “like a bronc-buster, trying to figure out a way to get a bullet inside the dragon”. However, he was eventually forced to jump off to avoid being hit with debris. Further attempts to mount the bulldozer were hampered due to oil that Heemeyer had spread on the vehicle to hinder such attempts.

Two problems arose as Heemeyer destroyed the Gambles hardware store. The radiator of the dozer had been damaged and the engine was leaking various fluids, and Gambles had a small basement. The bulldozer’s engine failed and Heemeyer dropped one tread into the basement and couldn’t get out. About a minute later, one of the SWAT team members who had swarmed around the machine reported hearing a single gunshot from inside the sealed cab. Heemeyer had shot himself. The coroner stated that Heemeyer used his .357-caliber handgun in the suicide.

Heemeyer’s body was removed by police. It took them twelve hours to cut through the hatch with an oxyacetylene cutting torch.

The rampage lasted 2 hours 7 minutes, destroying 13 buildings, knocking out natural gas service to City Hall and the cement plant, and damaging a truck and part of a utility service center. Despite the great damage to property, no one besides Heemeyer was killed. The cost of the damage was estimated at $7 million.