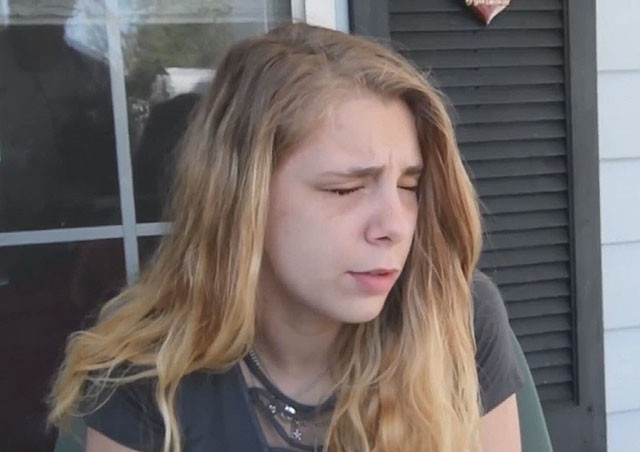 High On Crystal Meth, Kaylee Muthart Gouged Out Both Of Her Eyes As A Sacrifice To God

When parishioners ran out they found her holding her eyeballs in her hands and desperately tried to restrain her.

She has now told how – in a drug-addled haze – she thought she had heard God calling on her to make the gruesome “sacrifice”.

“I thought everything would end abruptly, and everyone would die,” Muthart told Cosmopolitan, “if I didn’t tear out my eyes immediately.”

“So I pushed my thumb, pointer, and middle finger into each eye. “I gripped each eyeball, twisted, and pulled until each eye popped out of the socket — it felt like a massive struggle, the hardest thing I ever had to do.” It was at this point that worried worshippers emerged from the church after hearing her screaming: “I want to see the light!”

She said the pastor later told her that by the time he reached her she was holding both her eyes in her hands.

“I had squished them, although they were somehow still attached to my head,” Muthart said.

It took a team of police to calm her down before she was airlifted to Greenville Memorial Hospital’s trauma unit, where doctors cleaned what was left of her orbital sockets to prevent infection.

Doctors believe the drug she ingested was laced with another chemical, causing her to have hallucinations in which she heard voices telling her to “sacrifice her eyes” so she could make it into heaven.

Muthart was a good student in high school, she told the magazine. But a focus on work to save money for a car and issues with an irregular heartbeat led to poor school performance. She dropped out and soon turned to alcohol and other substances.

“But when I was 19 last summer,” she told Cosmopolitan, “I was smoking pot with an acquaintance at his house and got a strange high. Later, I googled the symptoms that surprised me the most – numb lips and feeling like I was on top of the world. I’d long been a religious Christian; the high made me feel particularly close to God.”

Muthart said she believed the marijuana was laced with meth or cocaine – which appears to have made her relate drug use with a religious experience. And soon after, she was diagnosed with bipolar disorder. The extreme highs and lows of the condition left her susceptible to drug use, doctors told her.

“While on ecstasy, I studied the Bible. I misinterpreted a lot of it. I convinced myself that meth would bring me even closer to God,” she said.

In August, she picked at blackheads on her face until it bled. By Thanksgiving, Muthart moved from smoking meth to snorting and shooting it into her veins, she said.

Her mother, Katy Tompkins, was alarmed by her rapidly deteriorating condition soon before the incident.

“The day before it happened, which was my birthday, I was getting ready to have her committed, just to get her off the streets and away from it,” Tompkins told People. “But I was too late.&rdquo

In addition to her physical recovery from the self-inflicted wounds, Muthart also had to deal with rehab from drug addiction. After her release from the hospital, she also spent time at a psychiatric facility.

In addition to adjusting to life as a blind person, Muthart is saying she has come a long way in terms of using drugs.

“I can’t even imagine being around it again. I would just end up being really angry. I’m blind, I’m blind,” Muthart said. “I was scared. I was super scared to go to the rehab. But it was actually one of the best times of my life.”

Part of her recovery includes learning Braille. She also occupies herself by playing guitar and singing.

In spite of all the assistance she has received, her journey is going to be a long one. She said her faith is helping her cope with the difficult times and challenges.

“Anytime I get scared or lost, I go ‘nope. God wouldn’t want you to feel that,'” Muthart said.

Muthart said she’s hopeful she can help others while recovering and growing on her own.