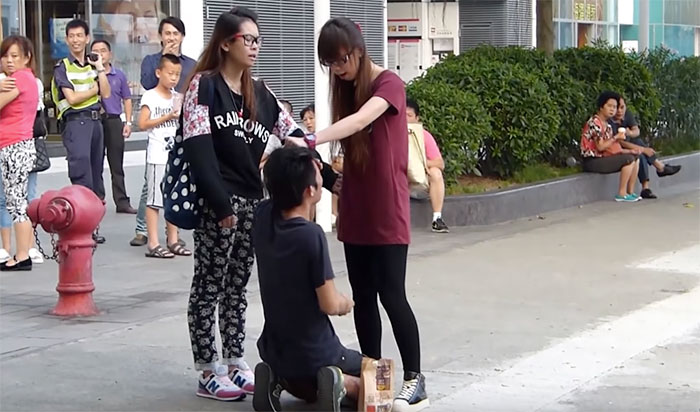 1. Going for a beer requires permission

It’s not just going for a beer that requires her permission, so does every other trivial excursion. In the mind of your power-hungry girlfriend, going for a beer with your friends spells out trouble and, therefore, it’s heavily frowned upon. All of a sudden, you can’t even pop into a pub for a quick one at the end of the day without facing a barrage of harassment when you return home. Subsequently, you’ve stopped doing it to avoid the hassle that, for the record, makes you a spineless pansy. This is a big one boys, but our signs you’re whipped doesn’t end here.

2. She makes your decisions for you

You question how you ever let it get to the point where she makes your decisions for you, but it’s true. In your protective prison/womb of a relationship you no longer really make anything more than minor life decisions for yourself. Somehow, she’s managed to grant herself a seat on the UN Security Council that is your life and she’s not afraid to wield her power of veto. As mandated by No. 9 of our signs you’re whipped, you have little or no say in the affairs that directly concern you, such as holiday destinations, major purchases or even plans for the weekend.

We all have friends who’ve fallen into the insane trap of sharing an e-mail account. You know the case: Buddy meets, dates and gets married to a dominant girl and, before you know it, you’re receiving e-mails that are signed by them both, but clearly written by her. This loss of independence is one of the clearest and most seemingly innocent signs you’re whipped by a woman. Certain prerogatives must be sacrificed in any serious relationship, of course, but don’t let her combine your personalities into one and do your speaking for you.

4. You go home when she’s ready

There was a time when men would drink their fill and decide if it was time to go home or not. Things have certainly changed for you if you’re whipped — and not in any kind of progressive and mature way either. The decision to go home during a night of socializing is no longer yours when you’re whipped; now you wait for the “I’m ready” command and then rush off to get the coats and issue apologies to your friends (who, once you’ve left, just shake their heads and talk about your pathetic transformation). Your friends clearly recognize the signs that you’re whipped and they can’t understand why you allow it to continue.

5. You have a different social group

When your friends are magically replaced with her friends, you can take it as one of the definite signs you’re whipped. It’s no longer acceptable for you to spend time with your old crew, so you find yourself looking for an acceptable substitute, which ends up being the boring boyfriend of one of her friends. You have simply lost touch with all your old friends and you can’t understand how it ever happened.

6. She commits you to events

You might think your calendar of events is pretty open for the next few months, but little did you know how wrong you are as she has committed you to other events. In actuality, you’ve already been penciled into about a dozen boring affairs that are completely unbeknownst to you. The really sad thing is that she does it without your permission because she knows she doesn’t need it — since you display such clear signs you’re whipped.

7. You constantly worry about her reaction

It’s a definite sign that you’re whipped when you get some piece of news (good or bad) and your thoughts immediately turn to how she will respond when she hears it. You don’t even consider how it affects you anymore, which is pretty weird when you think about it. When you walk through the door at the end of a day, you automatically start running through a list of things that have potentially made her angry and you brace yourself for her accusations and complaints.

8. Your friends don’t even bother

On your average Friday afternoon you used to get several calls and even more text messages from friends wondering about your plans for the evening. Now you get nothing because everyone just assumes that you’ll be kept under lock and key all weekend, and the scary thing is they’ve given up trying to help you escape.

9. What you once took for granted is now a victory

You’re whipped if your basic God-given rights, like killing a few beers and watching the game or other things you used to do regularly, have been usurped. Now, when you gain “permission” you feel like it’s your lucky day, even if it is tainted with the bitter knowledge that you’ll probably have to do something really annoying to pay her back for her so-called generosity.

Essentially, her power over you has managed to drain you of all your willpower and creativity. Often it’s the ego that gets hit hardest when a man has been whipped into submission. You know you’re acting like a chump and you begin to accept your dismal situation in order to spare yourself the embarrassment of dealing with it publicly. Over time you’ve been forced to water yourself down so much in the name of maturity and respectability — terms used to manipulate you — that you can no longer pretend to be of any use to anyone but your overbearing girlfriend. whipped into shape So, do you recognize any of these signs? If so, we feel for you even though it’s no one’s fault but your own; you should have defended your rights and dignity from the start. The end of the whip is not a nice place to be and if you’ve somehow found yourself there, we wish you all the luck in the world in reversing it. You’ll certainly need it.