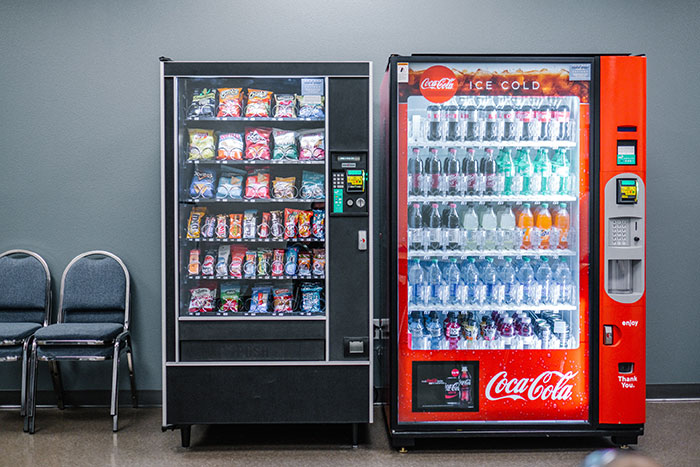 How much does each machine make monthly? Gross vs net.

My numbers are going to be estimates, since I was dumb and didnt do much inventory management (each snack had a different profit margin)

Machines in my good locations (which weren’t great locations, just good ones) would gross about $300 and net about $240.

So with a $2,000 machine you’re looking at about 8-9 months before your completely paid back. Also, winter months did much worse than summer months, since people arent out and about as much. Expect half as much gross in winter, or less if you live in a place that snows (my area does not).

The meh locations I had probably did around $100 gross and $70 net, these were locations that I probably shouldn’t have had, since it’d take too long to get money back.

If you have the money, invest in buying contracts for good locations that can gross in the thousands monthly. Those are the most worth it

Yes, we kept our vending machine prices super low, all snacks under 2.50. We had some candies that costed .33 cents (we didnt have to pay sales tax as a business, so that helped), and we’d sell it for $1. We also had some chips that would cost .40 cents and we’d sell it for $2.50. So 20% ish, we didnt keep our numbers organized because we were very inexperienced and dumb, but that was the average profit margin.

Also, a good thing to note, our drink machines made more than our snack machines. So we’d easily sell 60 cans of coke at $2 a piece a month, alongside other good selling sodas.

How do you decide to price each item?

We tried to make things as inexpensive as possible. More expensive drinks were $2.50 and the least expensive thing we ever sold was $.75, although in reflection $1.00 would have been easier.

From paying attention to other vending machines not owned by our company, i realized our prices were way too low.

In high foot traffic areas like amusement parks, drinks could easily get to $4.

We shouldn’t have done 4, since that’s Disneylands price, but 1 for sodas was too cheap. We should have done 2.

In my opinion, its better to start a bit higher and then lower if you’re not getting sales. If you rise the price on a location (as we did once), the employees might feel like they’re getting ripped off and asked us to re-lower the price

In locations where we started high, this wasnt a problem

Do you just start with one or does it a take a dozen to make a profit?

Definitely do not start with just one machine. If you only have a few machines, then you cant buy your product in bulk or else the food will go bad before it gets sold, and then you end up wasting money on merchandise.

I had about 10 machines before I got out of the business, and even with that I was throwing away a lot of merchandise.

10 would prob be the MINIMUM if a few of those machines are in high foot traffic areas. If the focus is on small or medium sized businesses, where each machine only makes a bit of money. I would recommend 20ish machines maybe.]

If you buy a machine was a refurbisher (used but looks new), you can find a really nice machine for 2 grand. Then you have to figure out how to move it. These things can easily weigh 500 pounds. I got friends and family to help and I’d buy them food as a thank you, so for me it was relatively cheap.

The other expenses to get one up and running are fairly small. Its the gas it takes to drive around and find a business thats willing to put a machine in their workspace (its really hard to get a yes. Expect 20 no’s per 1 yes at minimum). The other expense is merchandise, but if you buy wholesale then chips and drinks are really cheap

Where are the top 3 best locations to place a vending machine? What are your ways to contact them to place them?

My top 3 were different from the usual top 3, since I had a low amount of starting funds, but heres the 3 best for anyone IMO

The warehouse location I had made me a lot of money per machine. At every break a fair amount of workers would buy a coke and a bag of chips. So if the warehouse has 100+ employees, it’ll make bank.

Do you recommend machines that take credit cards, as not many people carry cash nowadays?

If you have a machine in a high foot traffic area such as a mall, you can make ALOT more money.

I tried experimenting with putting credit card readers in my different machines in small businesses, but it seems like people didn’t use the reader that much in those locations.

So its mostly recommended for the machines that already make a lot of cash money.

How much time each week did you spend managing your investment?

Personally, it took me about 5 hours a week to restock 10 machines. So it doesn’t take too long in general. So its possible with 1-2 open days

How difficult is it to find places/tenants willing to allow them?

Very difficult. Its not too difficult to get a couple extra locations overtime, but it takes a long time to find even one location.

So I recommend buying a preexisting vending machine business that already has a plethora of tenants.

It especially helps if some of those tenants work in a chain store – as this can be a tunnel that leads to more tenants in other chain locations.

What was your template for asking these warehouses to place a machine? in-person? email?

Fortunately, the warehouse locations we had were per-existing location when we bought the business.

So I think with warehouses sending emails and follow-up emails is probably the way to go.

Did you have any locations that were under contract? How would you prevent buying a route only to have the locations get rid of you since you aren’t the original guy they were doing business with?

Most of the locations we bought had physical contracts. There were a couple of places where we and the property owners lost the contract but they were chill.

There was one location without a contract where the manager got mad at us for having a vending machine on their premises – which we then told them its been there for years (2 years with us, more years with previous owner) and he made us move the machines. I don’t know how he didn’t notice the machines lol, but we moved them anyways. So its best to write a new contract if the old one is lost.

As far locations getting mad about a new owner – before purchasing a vending route owner should go on a route with you and introduce you to all the owners/managers and make sure its all cool between everybody. Every owner we were able to meet was cool with new vending management except the one mentioned earlier

Could you explain buy contracts from a location?

How much was it to buy an existing business?

The total put into it from a friend, myself, and a family member was initially 15k. If you start in this business it helps to have a lot of machines in good locations, which would normally cost you way more than 15k.

With a lot of capital you can buy a vending machine that already has 30 machines and an employee.

With a lot of sales of experience you can convince businesses with a lot of foot traffic to put your machines in their business. Making your client acquisition cost really low (less capital would be needed)

Where did you find the company you bought?

I found mine on BizBuySell. I was scrolling through local businesses for sale under 50k and stumbled across a couple vending machine ones.

Was this a side hustle to start with? Or did you always start the business with the intention of having 100% of your time dedicated towards it?

This was a side hustle – I am a college student and studying is my main priority. When buying the business, my intent was to treat it as a side hustle until it made enough money to be a main hustle.

Unfortunately it never got there, as i was too inexperienced in business and made too many mistakes and did not do enough research on the business. So i am no longer a part of it.

Kind of a big mix of them from things I didn’t think about before purchasing the business. Some of the main ones are –

When buying the business, i didnt think about asking for essential documents such as a current balance sheet, profit and loss statements, statement of cash flows, etc. With these documents I could have run ratios to find the true value and offer a fairer price

While owning the business, i didn’t know about quality control. Then I learned about quality gurus in Operations Management and figured that I could’ve been doing more to maintain high quality IE constantly cleaning my machines and making them look brand new AND offering changes in merchandise on property owners request

A big tech mistake I made was not implementing an inventory management system. With this I could track when snacks would expire, how fast snacks/drinks sold, and an updated profit margin.

Also in forming the business, we had three partners with equal say (33% say each), which created conflict since there was no clear boss. If I were to do another business involving a board of directors I would form it so that the CEO has majority equity and voting power while remaining board members have a little less say. It allows the business to flow more smoothly with less conflict

Is there are specific vending machine maker you’d recommend?

As far as vending machine makers, there are a lot of them. I didn’t notice a difference in quality based on brand, but one thing thats important to prepare for is that if you are buying a machine, make sure to take a picture of the serial number plate beforehand so you can research the machine. Things that are important to know is what year it was made, whether you can find a user manual for it (this is the most important, teaches you how to change settings and a bit on how to repair), and whether replacement parts for that brand can be found nowadays (most likely they can)

Also, there are some refurbishers that focus only on certain brands. So if there’s a refurbisher in your area, it may be a good idea to focus on whatever brand they prefer to refurbish. They might be able to buy old machines that you have.