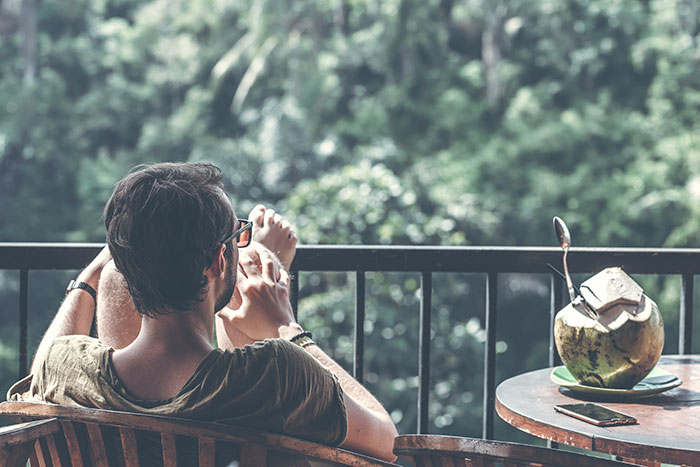 1. I retired at 30 and have been at it for almost 5 years now. I live a pretty low-key, lazy life that would probably drive a lot of people crazy from boredom, but I often find myself wishing I could live this way for eternity and it’s a shame life is so short.

Mornings are when I have the most energy and feel like doing things so I take advantage and spend an hour or so on chores like cleaning up, fixing stuff, opening the mail. Then I shower, get dressed and run some errands, usually on my bike. If I’m going out I’ll call up some friends and see if anyone wants to grab some coffee or have lunch or just see what they’re up to. If I have no errands to do I might just go for a 10-50 mile bike ride to the beach, or down some roads I haven’t seen before or in a while. Or grab a cigar and go for a long walk. Usually I’ll stop on a bench somewhere with my tablet and read/surf/call someone. I have one friend who’s the maintenance guy at a local club so I’ll stop by there around noon-time once a week for some billiards with him.

By the early-afternoon I’m usually back home and I’m pretty much a couch potato after that point. I play video games, read, watch movies/tv, see what my cat’s up to, take a break to cook up a good dinner and that’s about that.

Just about every weekend friends come over (or I go to their place) on Friday to start gaming and don’t leave until Saturday or Sunday.

Usually at least one day a week is a special day where I break out of my routine and do something that takes the entire day, like climb a mountain, take a drive to the nearest big city and hang out there for the day, go to the beach, go to a museum, theater, amusement park…

I think a big part of this is about getting into the right mindset more than anything. For me, there’s no grand project. Or big goals. Just enjoying the day to day as much as possible.

2. I retired over a year ago – at 41. I’ve been through the boredom. It’s almost like there’s too much choice and it’s paralyzing. Then I started volunteering. It was okay, but didn’t give me that boost I wanted. I still volunteer one day a week but it’s become more of a chore than anything. Then I tried creating things – mostly writing. I’m a competent writer, but it was a major ego bruise to generate stuff that sucked. At least in my opinion. Then I went through a period where I stopped trying. For some weeks I’d tell myself I didn’t need to rush it, that it was my job to keep my mind open for the universe to send me inspiration. That didn’t last long. I realized I was totally addicted to the internet. Like, while on the toilet, stopped at a traffic light, reddit over coffee, reddit til noon, other forums, other sites, etc. mint.com, yahoo finance, portfolio management.

Then I started a habit at night: I’d scope out the next day – down to the half hour. What I wanted to do: exercise, yoga, write for 3 hours, read a particular book.

What I found was that when I formally planned my day, it took away the overwhelming decision fatigue of having no plans and infinite options.

I still slip back into internet addiction (here I am!) but I’ve finished my writing and exercise and reading for the day. I feel better being online having accomplished things that give me personal fulfillment.

Anyway, that’s been my experience. Take from it what you will.

3. I retired at 47. I don’t have a lot of money but just enough to live a comfortable middle class lifestyle. I can’t afford a new Ferrari or an S-class Benz but my Corolla does just fine taking me to the golf course and back.

It is great to retire early if you have something to look forward to. You can travel or do a lot of the things you’ve always wanted to do, but such activities typically last a year or two. What will you do after that? (As Gujarati people say, “Pachhi su?”, meaning what comes next.)

But if don’t you have something to look forward to, retirement can be hellish. If you are the man of the house and are home all the time with nothing to do, it is a great way of having a fight every day with your wife eventually leading to divorce. Many people go into depression. And if you have lots of spare cash, it is all too easy to get into gambling, alcohol, drugs, etc. You can easily ruin your life that way and die young. Too much money can be a curse in such situations.

As for me, I love teaching. I have been teaching at universities and mentoring startups throughout my career but since my retirement it has become a greater part of my life. I have been an avid golfer for 28 years and now I am trying to obtain the certification required to become a teaching professional. So far, I have avoided fighting with my wife every day 🙂 or overindulgence in alcohol. I never tried any other vices and so it has not been all that hard to avoid them.

4. I semi-retired in my early 40s, meaning I can be more selective about the work I perform or not work at all. I can spend weeks working only 10 hours per week just keeping tabs on my investments, or I could work 40 to 50 hours per week as a consultant. I have a net worth of $5M+, and it’s a lot of work just to maintain and grow it. I sometimes dream about cashing in my chips and living off of an annuity, dividends or rental income.

On average, I’m a bit happier than before when I was working for the “man” but not significantly happier. I think I would be happier with retirement if my kids were grown up and my wife (who works by choice) and my friends were also retired. Therein lies the rub with “early” retirement; one has the wealth of an older person but the responsibilities and social circle of a younger person—it feels unnatural in many ways.

Early retirement for me is not “champagne wishes and caviar dreams”. At the dinner table I have two tasks tonight. I need to check my daughter’s multiplication homework and check the estimated closing statement for an apartment I’m buying. Neither task is glamorous, but I treat both with the same care.

The work that I do/investments I manage require fewer hours than my full time job. I’m the decision maker but I still need to work with difficult people and situations. It can be just as stressful and the consequences are far more significant. For example, the worst that could happen before is that one gets fired or laid off. Assuming one’s skills are marketable and one has a decent financial cushion, just take some time and look for another job. Now if I screw up, I can be subject of a lawsuit and/or lose hundreds of thousands of dollars. There are fewer rules and no boss to escalate the problem to.

It’s no secret that one needs financial discipline to amass great wealth, but that doesn’t necessarily mean that one possesses discipline in other areas.

Exercise: With all the extra free time, I thought I would exercise more. I don’t. Instead I fill my time with other more important and trivial tasks. I’ve come to the conclusion that I don’t like exercise and lack of time was an excuse. I feel the same way about exercise that many other people feel about saving for retirement: I know it’s important but it’s not terribly fun so I’ll get it to later.

Sleep: I thought I would get more sleep, but like exercise, I fill my time with other meaningful and meaningless activities. I average 6 hours per night…the same as when I worked full time.

Schedule: If it were not for my young children who keep a normal schedule, I would probably stay up until dawn every night and sleep in until noon. I am responsible for making them breakfast and taking them to school. My limited work also requires me to accommodate other people’s normal business hours. Without those constraints, I would probably tend toward my natural state of being a night owl.

Relationships: I have more time than my friends who continue to work full time. That in theory means that I could make an effort to drive somewhere to meet them and hang out. It should also mean that on average I should spend more time with friends. None of that has panned out.

Goals: Financial security has allowed me to take some increased risks in investments which have yielded corresponding rewards (e.g., started investing in apartments). Other than, I haven’t set any truly lofty goals and lack the discipline to figure it out. For example, I have a vague notion that I want to help people, but I’m not exactly volunteering my time at charities.

5. I retired somewhere in my 30s. Didn’t need to work for money. Stopped working. Retirement was initially awesome. I had achieved what I wanted to achieve, which was to leave the rat race. To stop trading time for money.

Then after a surprisingly short period of time (1 year?) it became oppressively boring. I had hobbies but you have to understand that outside of 7–8 hours of sleep, a person has to learn (relearn?) how to fill up 16–17 hours a day, every day, 7 days a week, 365 days a year.

Many people suggested that I travel, and I did travel a bit. However I have a little child and it’s difficult to travel when there’s school lunches to pack and kid activities to schedule.

I also tried to hang out with friends but I quickly learned that most of them were only able to see me during their lunch breaks. And sporadically at best. Most people at my age have bills to pay and kids to take care of.

After a lot of reading, working out and binge watching tv, I decided to return to work. The large gap of not being employed was tricky to explain, but I managed.

The difference is that now, instead of looking to maximize my pay or working 7, 9 or 10 hours a day, I pick contract or short-term jobs that seem interesting.

Short term because once you have all your financial needs met, when a job gets routine and boring (which they always do), it gets REALLY routine and boring. But by that time, the contract is over and I can relax a bit before picking something else.

Once my kid doesn’t need me, I guess I’ll be faced with REAL retirement. I wonder what I’ll do then. Perhaps I’ll be able to see more of my friends since their kids will have grown up also.

Either way, it’s a nice life.