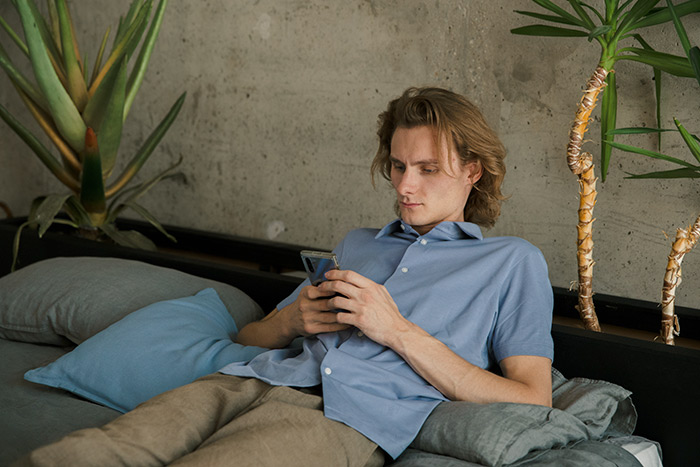 It sounds simple, but when I’ve realized it – it helped me a lot. I’ll try to share it.

The root problem with many productivity issues is being constantly overstimulated.

People often tell “I was doing nothing the entire day instead of working” while the truth is that you were not doing nothing. You were stimulating your brain all the time using social media or something else.

The message to your brain is simple then: I can be laying all day and still be stimulated. And THIS is why you feel the urge to lay in the bed. It’s cheap way of getting stimulation for your brain. Your brain actually hates doing nothing.

Try to sit somewhere for an hour or two and literally do nothing. Put your phone next to you and just look at it.

You will quickly notice that your brain starts to negotiate with you conditions of being stimulated.

At first, it’ll just tell “come on, let’s just check Twitter”. Then, it’ll start to lower its requirements and at some point, you can feel like on some sort of drugs. You’ll want to sing some song, move your legs, whatever. This is the key.

When feeling the urge to procrastinate, I’ve started to try to put it in a bit different perspective.

Instead of fighting ‘do it now’ vs ‘do it later’ with my brain, I’ve told myself ‘Ok, Brain, we don’t have to do it now. We can sit here the entire day and don’t even start doing it. BUT we’ll do NOTHING else.’

And this is what really started to help me.

With time, I’ve realized it’s actually hard to do NOTHING, when the brain is stubborn for a longer while, as you might have to wash your dishes, etc. So this is fine, but just do something that is not stimulating you. (washing my dishes without music etc. is not stimulating for me).

What I’ve also noticed is how bad ‘infotainment’ can be for you. You lay in bed and check some ‘nice websites’. You’re learning a lot about maths, space, and actually productivity from youtube, etc. (you might think it’s way better than social media). But in reality, it’s the same problem – you’re providing yourself an easy way to be stimulated without doing what you should be doing.