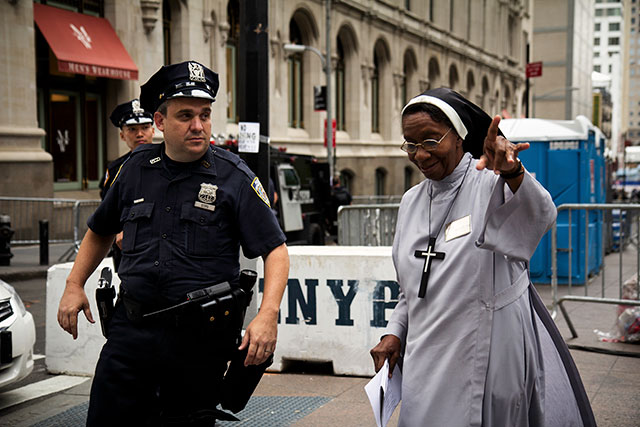 I have seen the “Never talk to a police officer, EVER” video.  While every single thing the lawyer said is true, his examples are not very realistic or common.

It is your right to refuse to answer questions from a police officer who stops you (this DOES NOT apply to identifying yourself).  However, refusing to talk to a police officer, especially when you haven’t done anything illegal, does not help you at the moment.

The fact is, most people will and do talk to police to explain what is going on in a situation.  When you choose not to talk, you are basically forcing the officer to make decisions without having all the information needed to make well-informed decisions.  This can play out in many ways, but if you are suspected of committing a crime and refuse to answer questions about the incident, there’s a good chance you will be arrested for whatever crime is being investigated.  Then, when your lawyer provides your alibi and you’re released, you start complaining about “false arrest” and “I wasn’t doing anything wrong and they just arrested me.”. Worse, if you resist arrest (and that seems to happen fairly often with people who refuse to answer questions), you can face additional charges — even if you originally did nothing wrong.

Here is how a certain incident played out:  Officers were called to a local bar about a battery.  When we arrived, we found Victim sitting outside with a large cut on his cheek.  He claimed that he had “just been standing there” when Suspect walked up and hit him without provocation or warning.  Bar staff and at least four uninvolved witnesses provided the same statements, saying the Suspect apparently attacked the Victim without provocation.

*IF* Suspect had exercised his right to not answer questions at the time, I would have arrested him for aggravated battery.

However, Suspect talked to me.  He explained that his girlfriend had called him to come pick her up from the bar, saying some creepy guy was bothering her.  When Suspect arrived, his girlfriend was at the bar, obviously upset and crying.   She told Suspect that the creepy guy had cornered her near a bathroom and began groping her.  She eventually pushed away from him and went to the bar to report the creepy guy to a bartender.  At about that time, Suspect arrived.

Guess who the creepy guy was?  That’s right — the Victim.

When I went back out to talk to Victim, he suddenly couldn’t remember anything that happened in the bar.  Luckily, the bartender confirmed that the girlfriend had told him about her being groped.  The bar also had a good video system and we were able to find footage of Creepy Victim repeatedly approaching the girlfriend and some sort of struggle occurring near the bathrooms.

Instead of arresting the boyfriend for battery, I arrested Creepy Victim for sexual abuse (that’s an Illinois-specific law related to groping).

By answering our questions and explaining the totality of the circumstances, the boyfriend was cleared.  Technically, he did commit the battery, but it was done in the heat of the moment in a misguided attempt to defend his girlfriend and stop the creepy guy from bothering women.   He even admitted he knew what he did was wrong, but he let his emotions get the best of him.  Frankly, I probably would have done something similar when I was his age.

So, you have the right to remain silent, but it’s not necessarily in your best interest to exercise that right.  If police have probable cause to arrest based on victim statements, witness statements, or circumstantial evidence, refusing to provide answers will probably result in your arrest.  If you haven’t done anything wrong or there are mitigating circumstances in the incident, you lose the opportunity to provide that information to the officer at the scene.  Yes, your lawyer can present it later, but “not being arrested” seems to be a better option than “not being convicted.”