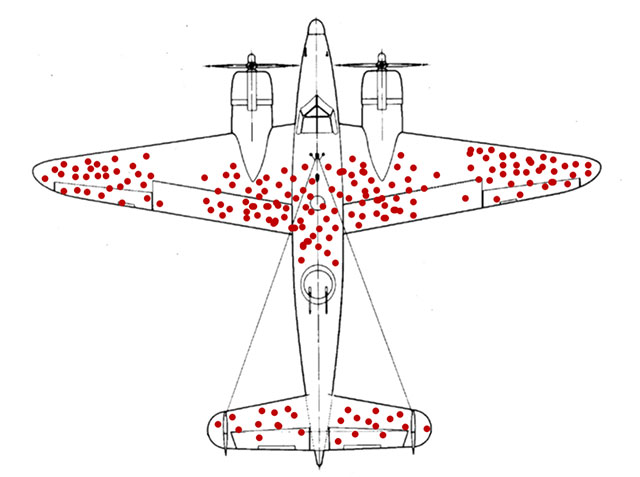 This is a picture tracking bullet holes on Allied planes that encountered anti-aircraft fire in WW2. At first, the military wanted to reinforce those areas, because obviously that’s where the ground crews observed the most damage on returning planes.

Until Hungarian-born Jewish mathematician Abraham Wald pointed out that this was the damage on the planes that made it home, and the Allies should armor the areas where there are no dots at all, because those are the places where the planes won’t survive when hit.

This phenomenon is called survivorship bias, a logic error where you focus on things that survived when you should really be looking at things that didn’t.

People complain that music today is all crap, and that the hits from the 60s, 70s, and 80s were so much better than what we have today. But they are ignoring all the tons of music that was produced in the 60s-80s that didn’t get popular enough at the time to find itself in regular rotation on today’s radio stations.

Same thing goes for paintings, or books. It seems like every book written a century ago is now a classic. But there were literally thousands of books published at the same time as, say, Grapes of Wrath, that didn’t get the same recognition, and have been forgotten about today.

The survivorship bias essentially means that while there are standout successes in any sample set, only studying the successes leads to you to make false conclusions.