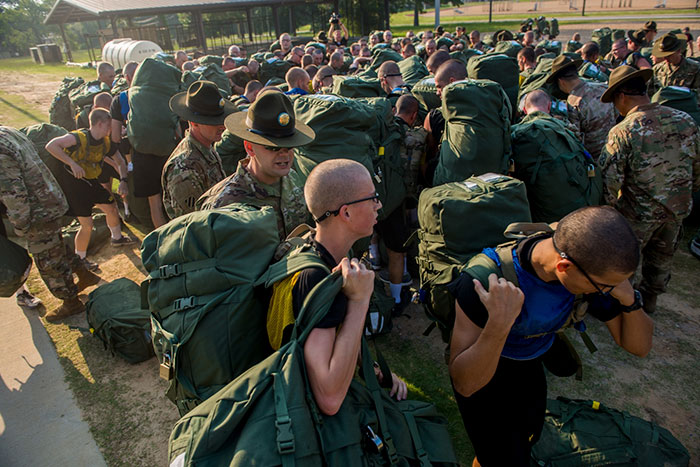 It took about 1.5 hours to get from the airport to bootcamp, the first hour and 15 minutes of which was a lot of people talking about their "military dreams". "I’m going to be a _! I hope I get stationed _! I did _____ before enlisting! Lalalalala" – until you see the sign pointing to the training center (aka bootcamp). Mine was in New Jersey, which meant that the closer we got to boot, the greyer and darker the skies got. Rainier. More pollution, etc. The last 15 minutes we rode in silence, "regret sinking in".

When we finally came to a stop, well inside the dreary looking gates of hell – the door of the bus swung open, and in came the short/stocky man with the wide brimmed hat. Immediately the yelling began. Slowly yet urgently he made his way down the aisle of the bus – screaming and swearing, telling everyone to look forward, not turn their head, shut the fuck up and don’t fucking look at anything. "EYES IN THE BOAT" is what it was referred to.

We were then marched off into a medium sized conference room (our company was approximately 80 people). We sat on wooden picnic tables in a room that was not properly heated for the late winter. We had to keep our backs straight, even though the seat itself had wooden grating – in a few hours time when we were finally marched into the "forming squad bays" – backs and asses would be sore as fuck from those chairs.

In the mean time though, there was a lot of yelling, nonstop – people giggling at the silliness of it all were screamed at and "beat". Beating refers to "make them do physical activity (pushups, situps, whatever) until they can’t anymore – then scream at them for slowing down or doing inferior pushups or whatever. That person would be "marked" for the next few hours, being scrutinized extra for anything they fucked up on.

Bootcamp for the next 8 weeks consisted of; Boring-as-fuck classroom lectures designed to teach you how the military works from a "intro to wikipedia" standpoint. These lectures droned on for hours, to the point where almost everyone dozed off and was summarily beat as a result. Pretty sure these lectures were designed to do this not to teach anything of value (what little of it there was) – but to give them more excuses to beat us.

Marching us around to make us fuck up. Marching is the least important thing about the military, yet is held as the stereotype of the most military type behavior. Just put a group of 80 people out in a field in the middle of a rainstorm and tell them they all have to behave like synchronized swimmers. Beat beat beat.

Lunchroom antics. For starters, stomachs aren’t used to the bootcamp food (even though it was for real fucking amazing) – so you’re going to piss and shit a lot after the initial constipation. Fortunately they were nice enough to "break" all the bathrooms at the galley, so if you had to go to the bathroom you had to "walk urgently" (no running in boondockers!) all the fucking way back to your respective squad bay (usually about a half mile away) – so you could shit yourself. Also you had a timer on you for how long it would take you to get back. Regardless of how long it took, you were going to get beat for having to use the bathroom. For those fortunate enough to actually sit and eat for the 15 minutes we were given, we got to play the choreographed game of "how many things can they find wrong with you between the time you start eating to the time you have to put your tray away". Beat beat beat.

Lots of doctors visits! Most people that join up aren’t the healthiest specimens. Teeth need to be pulled, braces installed, glasses applied, etc etc. Everyone gets re-vaccinated on like 20+ things no matter what though. Also Small Pox, but more on that in a minute. Oh also all of the doctors, regardless of how they are dressed – are officers. And they are all designed to work with the program. So a typical first day at the docs goes like this; "Why hello! How are you?" "Oh I’m fine, thank you for asking!" "AHEM. Thank you for asking, MA’AM (what you call female officers whose rank is unknown)" Yep, thats more beatings after the visit.

Waking you up at the crack of dawn to beat you for the start of the day. You didn’t do anything wrong – but beatings you will get! Going to bed at 10PM flat. Because they are required to be able to say that you were given an 8 hour window of sleep – regardless of the antics that happen in the night or the fact that you’ll stand watch for about 2 hours in the middle of it.

Speaking of watch. Everyone had to get up at random periods of the night so they could get dressed, march around in the dark by themselves, and go stand in a room for a few hours doing jackshit and writing about the dumb shit they see in a log book in the most mind-numbingly-tedious format. "02:30 – 01MAR05 – RECRUIT LORECHIEF SNEEZED." Everything in bootcamp is all caps by the way. That shit will fuck up your hand-writing for years.

Fuck. All of this is to say that this is actually the relatively easy part of bootcamp. At least it’ll sound that way on paper. Fact of the matter is that this is all "ops normal" and this is what they will advertise to you before you go to bootcamp. Here’s where shit gets fucking real though.

You will feel like garbage the entire time. Why? Because you’re literally going to have a cold, flu, mixture of the two – the entire fucking time you’re there. For starters, every room you ever go into is going to be so over-saturated with the smell of cleaning agents, that you’re going to feel like you’ve been bathing in bleach (more specifically; SIMPLE GREEN. FUCK). Your nose and sense of taste is going to go out the window the first half hour you’re there. But don’t let this fool you – nothing is fucking clean. Especially in new jersey. It’s damp, moldy, smells like cleaner, and is covered in bacteria because the only people that clean this shit are beat up recruits like you that don’t give a shit about how clean something is.

No really, you’re going to be fucking sick. There is a "no touching your face" policy in bootcamp because they think it’ll help prevent you from getting a sinus infection. In Jersey they call it the "Cape May Crud" – but its basically a 1-way ticket to an un-treatable cold that’s going to make you slow, in pain, drained and miserable.

You’re getting a damned small pox vaccine. Do you know what that vaccine does to your body? For starters, the arm they inject you with is going to want to fall off for the next few months. You need that arm, regardless. But too bad, the entire side of it will feel like you were punched and therefore bruised by a linebacker. Also your immune system will literally go to shit trying to immunize. This coupled with all the other fucking shots you got on both of your arms, you’ll be sick and fighting off infections left and right.

Beatings aren’t that bad. Technically they are just a lot of working-out which is good for you. Hooray! Oh wait, I said both your arms feel like shit and you’re sick as a drowned rat. Good luck trying to meet their beating-regimen-standards when you feel like you want to pass out and die in a pool of your own snot and vomit.

I could go on. Fact of the matter is that bootcamp is a pain in the ass, even for physically fit and well-disciplined people. But it’s not because of the stereotypical bootcamp activities. It’s the shit they don’t tell you about. I ended up getting pneumonia about a week before completing basic – and it almost resulted in me being sent back some weeks into a different company if I didn’t "snap out of it". Basically I was drugged up on codeine and all sorts of other shit, wearing my spiffy dress uniform for the ceremony, looking like I was about to die. I had 10 days off from the time I graduated til the time I had to show up at my first unit – which meant nothing but sleep and try to get better just in time to spend the next year on a boat and learning the hard way that I’m a very seasick person. All of this for free college, lol. I’m 100% serious when I say that I should have just gone into debt with student loans.