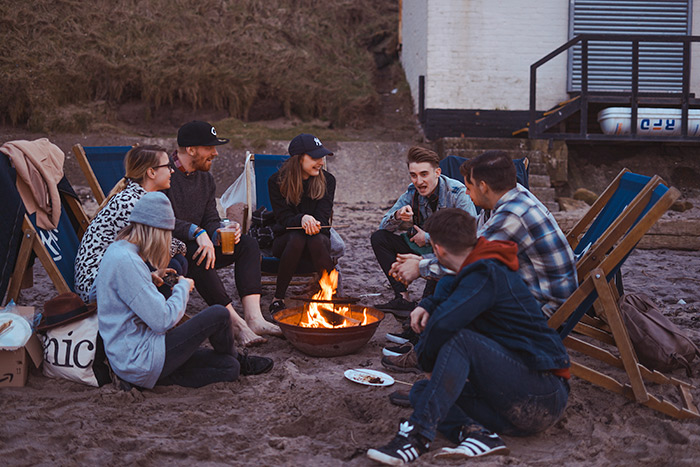 Discovering this seemingly silly tip a couple years ago has been so helpful for me in becoming a more likeable person. I always wondered why no one asked for my opinion on things and it wasn’t until I was told this exact thing that it hit me. Now a couple years later, I see I got the habit from my Dad. Every thought and opinion he has on something makes it sound like it’s the worst thing in the world, and admittedly why our family never asks him for his opinion.

2. Remember that other people get social anxiety around *you*.

For some of you this may be a little hard to believe, but you do represent ‘other people’ to other people. There are people who are asking questions about how to talk to you, how to position their body language relative to you, how much eye contact to make with you, and how to get you to be friends with them.

Remember this when you feel socially awkward! I can tell you from the experience of being all over the spectrum – I’ve been popular, charming, awkward, lonely, and everything in between – that confidence and good social skills is a massive game of pretend.

I remember going to a party in university once and looking around, seeing the clumps of people, and I realized everyone is nervous! Nobody knows what to do. Not only that, but I’ve always been of the strange assumption that everybody knows each other except for me. Not true! Everybody just clumps to who they know.

When you realize that everyone is nervous… you realize that you can just be the confident one. People will assume you’re the real deal – honestly. And then you become it, in short order. You just go up to a clump of people and say “Hey! Just wanted to come say hi to you guys. Are you having a good day so far?”

… Now imagine the roles are reversed and someone walks up to you like that. Assuming they’re smiling and being polite, you have tons of respect for their courage. You see them as seriously confident. It always works that way.

3. When you have the opportunity to give a guy a genuine compliment, do not hesitate to do so. Not only are compliments fielded at men more rare, but a man can ride the high off a single compliment for years.

Knowing this, I found that when I spoke to my male friends about my feelings on the topic they all unanimously agreed that they too received very few compliments in general. But when they did, man do they still think about them even years later.

So to summarize, continue to compliment (genuinely) when you can, but know that men in particular can really get hit in the feels when a sincere one lands

4. If somebody is rude to you, ask them to repeat themselves.

“sorry?” “excuse me what was that?” “can you please repeat what you said?” in a calm confused tone

They are most likely to either rephrase what they said or say it in a nicer way.

Most people feel the guilt kick in once they get another chance of repeating what they said before, they get this little feeling of either ‘what is wrong in what I said?’ or give them a slight realization of ‘wait.. There seems to be consequences’ .

This also makes the people around look down on the person that was offensive shifting the focus at them once again.

Very important to keep in mind that it’s a 2-way street:

-Do I respect them?/Are they respectful of me?

6. Ask yourself “what does it matter to me” the next time you find yourself judging someone for their clothing, interests or hobbies. The more you train yourself to not care about the personal preferences of other people, the more relaxed and nicer you become as a person.

I’ve tried to live by this for a good seven or eight years now and it has been life changing. Not only am I less critical of others, I’m less critical of myself, and feel more free to wear what I like and make choices purely for my own preferences, as long as they aren’t hurting anyone. This mentality would serve anyone well, I think.

7. Allow people the freedom to change. If someone decides to modify their beliefs or behaviors in a positive way, refrain from pointing out their inconsistencies, being sarcastic, joking, or otherwise commenting.

If someone changes their mind and behaviors over time, it’s more likely a sign of correcting errors in premature decision-making or undoing bad habits. As life goes on, people gain more experience, perspective, and information to make better, well-informed decisions. Change is a sign of growth so it’s best to be supportive throughout that process.

8. When someone is going through a difficult time and is sharing it with you, don’t talk about similar problems you’re having as a way to relate. Instead, just listen.

When someone’s sharing something difficult that they’re going through, so many people get this urge to “empathize” by replying with similar struggles of their own. This is one of the worst things you can do when someone is trying to get something off their chest to you.

Instead of talking about yourself, just listen to them. Make them feel heard. Ask questions and help them work through it themselves. More often than we realize, people just to need to feel validated and heard when they’re going through something personally difficult.

Years ago, I suffered a great loss, and turned to one of my friends for emotional support. His immediate response was, “Oh man, I’m really sorry to hear that. Because I remember when I had a similar loss, it was really rough for me. And what I felt was… etc.” My friend wasn’t trying to be insensitive or rude, but it reminded me that many people accidentally do this when dealing with someone else’s grief.

I felt that my problem that I was trying to convey to my friend was lost on him, and I really just felt worse afterwards. But if he listened to me and made me feel heard, as another one of my friends did later on, I would’ve felt much better. Remember this if a friend or loved one ever reaches out to you to hear something they’re going through.

9. If you want to offer a deep and memorable compliment, ask someone how they did something. It gives them the opportunity to tell their story, and shows your genuine interest.

How did you think of this ? What were your thought processes?

10. If you’re running late to meet somebody, and don’t have a legitimate excuse, don’t make one up. Their annoyance to your lateness will make them doubt any thinly veiled excuse you offer. Simply apologise, and tell them you should have left earlier.

They may be annoyed initially, but at least they won’t resent you for what they view as you lying to them.

‘Thanks for waiting’ is also an effective expression to use when you’re late meeting someone. Although, only use this one if the person waiting for you already knows you’ll be late.

11. Monologueing kills your social life. Don’t volunteer details about your life when no one asked. Arouse interest, then share when they ask

Monologueing is basically when someone makes a conversation one sided. It sounds a lot like someone talking to themselves but just in the presence of another person.

When we monologue it makes people tune us out which ultimately defeats the purpose of a conversation. To make it easy conversations should be 50/50. Obvs not everyone is talkative but also a large amount of people will just be polite and let you talk even though they really want to get some words in. Maybe they had something to say 30 seconds ago but you kept talking… For some reason.

Monologueing is very frustrating in general when people wanna talk too.

12. If you’re listening to someone in the middle of a conversation and it gets interrupted, one of the best things you can do is to ask them to finish what they were saying.

It shows that you truly care about what they have to say and that means so much more than you’d think. This will do wonders for making friends as well as improving relationships in general.

Everyone wants to be heard, but nobody wants to listen.

13. When meeting new people, don’t make a joke with their name, however funny or harmless you may think it is. They’re probably sick of it. At best you come off as boring, at worst you’re a dick

In general, if there is some “low hanging fruit” regarding someone’s name, appearance, etc. when you first met them, don’t say it. They’ve heard it before, many times.

14. Make the habit of using questions instead of judgement on scenarios where you’re trying to express your opinion

I’ve been using this tip particularly with my family in the regular basis. I no longer tell my wife “you look like you didn’t sleep right”, instead I ask “how did you sleep?” Or to my daughters, instead of “you broke this toy” I would say “what happened to the toy?” and let them explain. This has helped me be seem as more understanding, less accusatory and gives others the opportunity to rationalize and explain the situation. This also helps them vent and respect me more for not jumping into conclusions, but ultimately this helps avoid conflict.