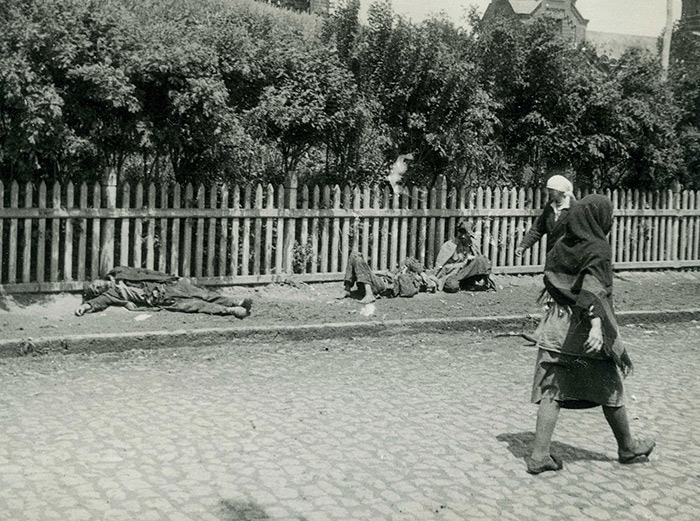 – Mothers would lock their children in cottages to protect them from the roving bands of cannibals. Other parents sent their children away in the hope that they could be saved by others. Parents would give their children away to distant families or to strangers, or leave them at train stations. The desperate mother’s would hold their babies up to train windows, not to beg, but in the hopes that they would be taken in by someone aboard the train (who was likely from the city and therefore not about to starve to death).

– Mothers telling their children to eat them when they die. “Mother says we should eat her if she dies.”

– Countless accounts of parents eating their children. Families would kill the weakest member.

– People dropping dead from starvation while waiting in the massive lines for a measly amount of bread. “People appeared at 2 o’clock in the morning to queue in front of shops that did not open until 7. On an average day 40,000 people would wait for bread. Those in line were so desperate to keep their places that they would cling to the belts of those immediately in front of them…. The waiting lasted all day, and sometimes for two…. Somewhere in line a woman would wail, and the moaning would echo up and down the line, so that the whole group of thousands sounded like a single animal with an elemental fear.” One women begged herself to the front of the line, clearly on the verge of death. Upon forcing herself into a shop, the shopkeeper shot her dead.

-“Hanna Sobolewska, who lost her father and five brothers and sisters to starvation, remembered her younger brother Jozef’s painful hope. Even as he swelled from hunger he kept finding signs of life. One day he though he could see crops rising from the ground; on another he believed he had found mushrooms. “Now we will live!” he would exclaim, and repeat these words before he went to sleep each night. Then one morning he awoke and said: “Everything dies.””

-School children would first write to the authorities, in the hope that the starvation was a result of the misunderstanding. One class of elementary school students sent a letter to party authorities asking “for your help, since we are falling down from hunger. We should be learning, but we are too hungry to walk.”

– Houses that had smoke rising from their chimneys would be investigated for cannibalism (that’s how prevalent it was). Anyone selling meat was investigated and a close eye was kept by the authorities on slaughterhouses and butchers that may be abusing the circumstances.

– People crawling to the graveyard to dig their own graves and then proceeded to lie in them and wait to die. “Petro veldii showed rare strength when he dragged himself through his village on the day he expected to die. The other villagers asked him where was going: to the cemetery to lay himself down. He did not want strangers coming and dragging his body away to a pit. So he had dug his own grave, but by the time he reached the cemetery another body had filled it. He dug himself another one, lay(ed) down and waited.”

– Since many would trek to the cities in order to beg, there were many instances of babies seen suckling the breast of the lifeless grey corpse of their mother. A single city dweller could witness this same scene multiple times.

– Healthier peasants would form burial brigades would sometimes take the weak alongside the dead for burial (since they were paid per corpse). They would talk with such people along the way and explain that they were going to die soon anyway so what difference would it make? In some cases the weak would dig themselves out of the shallow mass graves, since the grave diggers would be too weak to burry them deep. Eventually those apart of the burial crews would starve as well and wild dogs would eat their corpses.

– A journalist (Gareth Jones) made the illegal trip to Ukraine. He trampled through the countryside with a backpack full of food. He slept on dirty floors with starving children and saw the famine for himself. In one instance he shared his food with a little girl and she exclaimed: “Now that I have eaten such wonderful things I can die happy.”

– Yosyp Panasenko (Ukrainian musician) was dispatched by central authorities with his troupe of bandura players to provide culture to the starving peasants. Even as the state took the last of their food, it had the grotesque inclination to elevate the minds and rouse the spirits of the dying. They found village after village completely abandoned. When they finally came across some people: two girls dead in a bed, two legs of a man protruding from the stove and an old lady raving and running her fingernails through the dirt.

– A women doctor wrote to her friend in June 1933 that she had not yet become a cannibal, but was “not sure that I shall not be one by the time my letter reaches you.”

– In one village the women tried to form a sort of orphanage. The orphanage was in pitiful condition. “The children had bulging stomachs, covered in wounds, in scabs; their bodies were bursting. We took them outside, we put them on sheets, and they moaned. One day the children suddenly fell silent, we turned around to see what was happening, and they were eating the smallest child little Petrus. They were tearing strips from him and eating him. And Petrus was doing the same, he was tearing strips from himself and eating them, he ate as much as he could. The other children put their lips to his wounds and drank his blood. We took the child away from the hungry mouths and we cried.”

– Children recruited to watchtowers that surrounded the fields to report on their family members if they were taking any grain for themselves. Half a million preadolescent and young teenage boys and girls stood in the watchtowers observing adults in 1933.

– Entire villages becoming wiped out with not a single person surviving leaving a chilling silence behind in the country side.

– Collective farms that could not meet their quotas were required immediately to surrender fifteen times the amount of grain that was normally due in a month. No village could meet their quota. This resulted in the authorities searching everywhere and confiscating any food they found, including potatoes in the gardens, seeds for next years crops and even supper that was on the stove. It didn’t matter they took everything. Soviet youth brigades would go village to village, exclaiming “Peasant! Peasant! Where is your grain? Confess!” They took everything resembling food that they could find and ate it, along with humiliating the peasants. They would urinate in barrels of pickles, make starving peasants box each other for amusement and make them crawl and bark like dogs.

– Grain left to rot in storehouses that were guarded by the NKVD. Any food relief or donations raised by Ukrainians living in Poland, or organizations abroad, was denied categorically.

– Rape and robbery by authorities was widespread under the guise of grain confiscation.

– When farm animals that were not seized would die, crowds of villagers would follow the veterinarian to the burial pit for a chance at a piece of the corpses. The veterinarian would douse the corpse with chemicals to make it inedible and yet the people still jumped at the corpse in a furious frenzy hacked off what ever they could.

I think that this Ukrainian children’s song from the time sums it up perfectly:

“Father Stalin, look at this

The hut’s in ruins, the barn’s all sagged

All the horses broken nags

And on the hut a hammer and sickle

And in the hut death and famine

No cows left, no pigs at all

Just your picture on the wall

Daddy and mommy are in the kolkhoz (form of collective farm)

The poor child cries as alone he goes

There’s no bread and there’s no fat

The party’s ended all of that

Seek not the gentle nor the mild

A father’s eaten his own child

The party man he beats and Stamps

And sends us to Siberian camps”

What’s even more terrible is that many of the survivors that had to endure this terrible existence would later end up in Gulags or even just sentenced to death for their nationality or social class on mass. If you survived that: there was a good chance you would die in world war 2. Death was extremely slow and excruciating.

When Stalin’s wife heard details of this, she killed herself by shooting herself through the heart on the anniversary of the October Revolution. Which subsequently made Stalin (somehow) even more brutal and heartless.