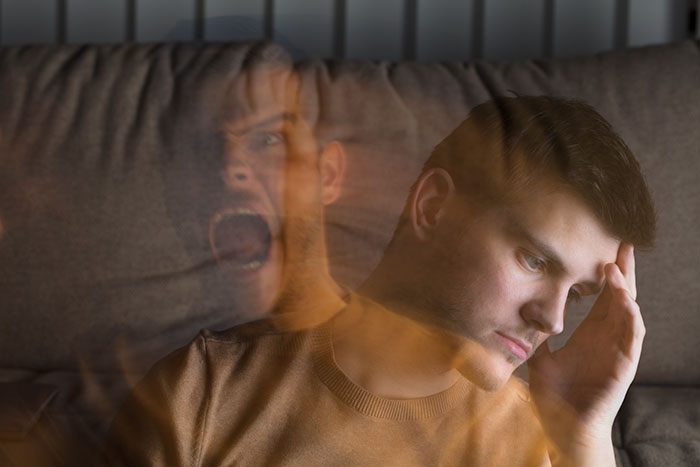 1. It’s the most amazing pile of beautiful misery to grace the hell of my divine existence! When your good, things are FANTASTIC! the other %80 of the time is spent trying to prevent your (percieved) justifiable suicide.

2. I have bipolar disorder type 2. It has affected me my whole life, though I didn’t realize it and didn’t get diagnosed until my late 30s.

I’m afraid of my own brain. I hyper analyze every mood and feeling, worried that I may be sliding into yet another episode of mania or bone crushing depression.

It sucks. I feel like so much of my life’s potential has been eaten up by the alternating bouts of depression, mania, and the guilt and shame I felt (and still feel) when I do have clarity. I lost my job, my marriage, and very nearly lost my life to bipolar. My ex tried to get my partial custody revoked because I am “crazy” but thankfully in my state that doesn’t hold water unless I demonstrate an inability to care for my kids.

I’ve also lost almost all of my friends, either due to manic or depressed behavior that alienated me from them, my ex’s embellishment of how insane I am, or my isolating myself after my last nervous breakdown. It took 18 months to be well enough to try working again, and every day at work seems like the day I will quit because I can’t take the stress and anxiety of it. But I go. And I keep going every day.

I can’t handle this illness anymore. But I take it a day, an hour, a minute at a time if I have to. And I take my medication religiously. At least I know without a doubt that I have done everything in my power to control this thing rather than let it control me.

3. Sometimes I’m very happy all of the time and I don’t need much sleep. I will start a lot of things and take up many new hobbies which rapidly develop into an obsession and then I’ll move onto something else.

It takes a lot of effort to get things complete because I will work on multiple tasks simultaneously. I was once cleaning the 2 bathrooms, sorting through laundry, cleaning the cooker and dishwasher, cleaning the patio doors, washing the floors, dusting bookshelves and sorting out the drawers under the bed all at once. I was running from task to task and became convinced my slippers were slowing me down. Our apartment at the time had a long, open plan living/dining room and kitchen. I grew convinced my slippers were slowing me down and kicked them across from the living room and into the kitchen.

I also suffer from memory problems during hypomanic episodes, which means that I only remember brief things once the episode has passed. An example of this is with my medication. I had gone to the pharmacy to collect my prescription, but they didn’t have enough and I said I’d call back in for the rest another day. They gave me a slip of paper and I went back a week later after running out of the meds I’d got the week before.

The pharmacist had said I’d been in the day after and collected the rest of my prescription, which I have absolutely no memory of, nor did I know where I would have put my medication if I had. She ended up doubting herself and went back to check the records and could show me that I’d been back in to collect the pills. Not even the time or date jogged any memory. I left to go back to my doctor and ask for another prescription but I had to go home for something. I got to the entrance of my apartment building and I couldn’t find my keys in my pockets and went hunting into my bag. While digging around I found a paper bag and found the remainder of my prescription that I’d picked the following day. I went back and told the pharmacist I’d found them and apologised for taking her away from her other jobs.

I also avoid going outside when I’m hypomanic. When I’m in large crowded areas, I pick up on people’s emotions and start feeling them as if they were my own. And it’s not just a single emotion I’ll feel at once, but a mixture of all emotions. Because people with bipolar’s emotions are already extremely elevated, this becomes intoxicating and I’ll end up very hyperactive and happy, but I’m also more prone to getting angry too. Because I’m hyperactive, I am doing everything faster and it feels like time around me has slowed down, so people walking in front of me, or having my way somewhere blocked makes me very angry.

If I do need to go into a crowded area, I’ll have to spend a few hours mentally preparing myself to go out. So I’ll make a mental map of the places I need to go, the route I’ll need to take to get the things I need in the most efficient way and I can’t deviate from that route as I’m more easily distracted when hypomanic and if I deviate from my route, then I’ll end up spending all my money on cheap tat because I felt like it would make my life a lot better at that time, and then not know why I got it.

My memory problems have also got me into debt several times too. I can buy things and forget I’ve purchased them, then remember I was wanting to buy it and go and buy it again. It’s not uncommon for me to buy 2 – 3 copies of the same thing, and shops rarely allow you to return them, so I end up just giving the multiples away to people.

I’m also prone to making rash, snap decisions. It’s not uncommon for me to randomly quit a job or take a sudden dislike to a close friend and remove them from my life. Due to the way bipolar works (depression and hypomania/mania), your job performance will drop while depressed, and then you can suddenly snap into a hypomanic/manic episode without knowing it and start irritating those around you. Because of how work places tend to treat those with mental health problems, they often won’t take you back if you quit because they see you as a liability.

But you tend to crash into one of the deepest depressions you can have when it ends. Like the saying goes “the higher you go, the further you have to fall”.

4. Some people say stupid things “yesterday I was feeling great and today I just feel normal, omg I’m like so bipolar lol”, don’t say this, it’s hard enough being a victim of it, and it becomes infuriating when people say things like this (this is pretty much true for all mental illnesses).

When you are under it seems like getting back up is impossible, sometimes the weights are so heavy you can’t get back up and you have to hold your breath until they get lighter but the longer you hold your breath the harder it is to not sink further leaving you to be in constant hope the weights become light enough to cope and get back up. For most the thought of giving up and letting go crosses their minds, once you’ve drowned you don’t have to struggle and cope anymore, because of this some people do. For some people the weights do get lighter and they can get back above the surface and continue swimming, some people don’t.

Friends are other swimmers, some have their own weights some don’t and it’s your friends who will rescue you when you sink under, they will help you swim carrying you along but they are also swimming and have to carry themselves, the more they help you the harder their own swimming becomes, some will move on and leave you, some will stay, and you will encounter more, replacing the ones lost.

Some use drugs to help with the struggle, drugs will temporarily make the weights lighter and it will be easier until they wear off but when they do wear off the weights will be heavier than before. Some people hurt themselves, doing this makes the weights slightly lighter but it makes the wearer weaker.

I can’t say bipolar does get better, certain medication will lighten the weights as will positive things in your life but you will always wear your weights. So why keep swimming? Everyone drowns at some point anyway so what’s the point? You want to get as far as you can during your swim, you want to experience the good things and you want to keep going, you want to beat your weights, you want to help carry others, you only get one swim, some people have it easier than others but it’s best not to waste it.