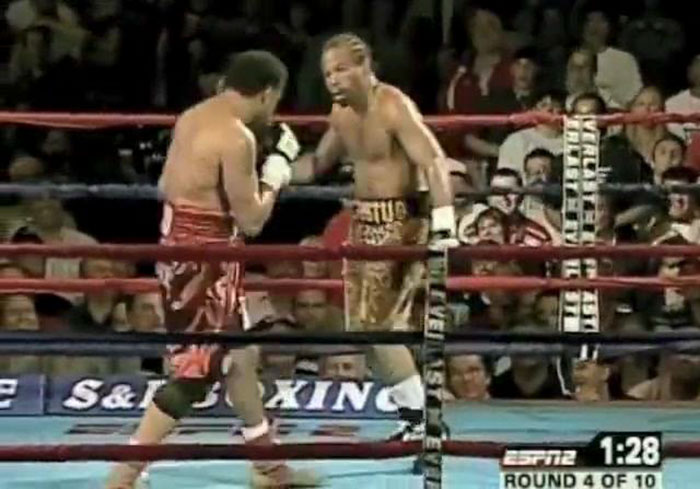 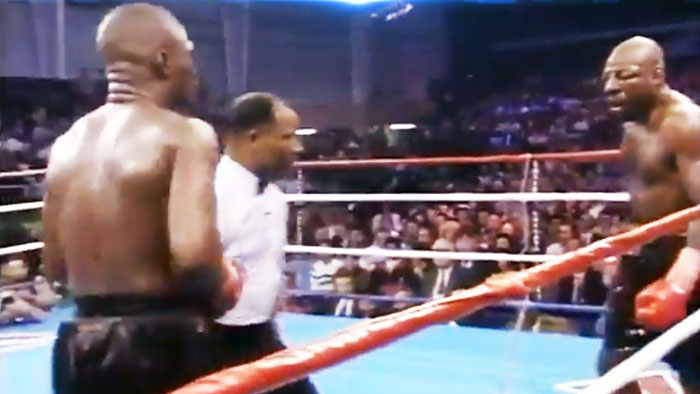 James Toney was coming up in weight to challenge respected 168lb champion Iran Barkley for his title. Iran was coming off an amazing year that included doing the impossible to win a decision over the legendary Tomas Hearns. Not that it matter to James who produced a 30 minute And1 mixtape of genius level technique, disgusting hand speed and beautifully fluid violence.

Iran Barkley was a swarmer, never stopped coming forward, never stopped pressuring, never stopped throwing his vaunted left hook to the body. James Toney was arguably the finest counter puncher of all time. Never stopped uppercutting him for his attempts.
It was like watching a man stuff himself face first into a wood chipper. Iran was indifferent. Round after round he walked forward, calmly, indifferent to it all as James just couldn’t miss. At one point he slipped a jab and countered with a beautiful right hand that sent Barkley’s mouth guard into the second row.

At no point in the 9 rounds did anything happen that could be called remotely competitive. James lit Barkley up with blistering hand speed, effortless defense and produced what amounted to a 30 minute highlight reel. It was about as perfect as a fighter can look in victory. Iran Barkley looked about as good as a man going through something like this beating could. Even as his trainer called off the land slide, Iran hadn’t won a single second. But he begged for it to continue. The fight was called against his iron will. 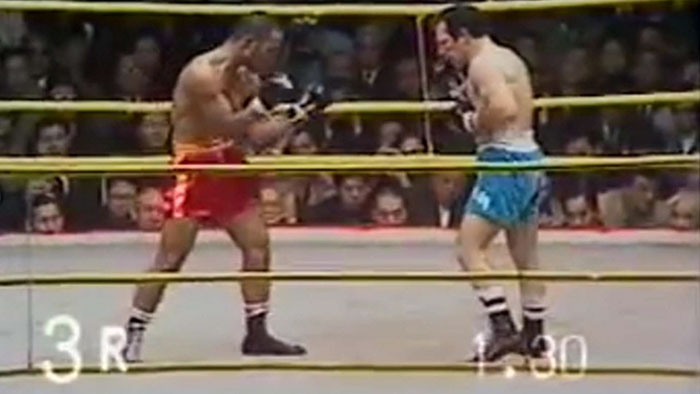 Takeshi Fuji was tough as nails, and arguably the single hardest puncher to ever fight at 140lbs. Only 3 men had ever made the final bell with him. Niccolino Locche wasn’t. He didn’t train much. He chain smoked and took a fight every weekend. By 1968 he fought over a hundred times, posted 89 wins and just 2 losses with 14 draws. The draws were a product of his unique defensive style. His offense was nothing more than a consistent jab, with a left hook to the body as a change up. If Locche was an offensive minimalist his, defensive skill was cartoonishly maxed out.

It took about 3 rounds before Fuji landed an actual punch. As Locche proved slipperier than the greased up deaf guy. In front of the Tokyo crowd Takeshi Fuji threw his wild haymakers, his booming overhand right, his leaping left hook. Locche casually shoulder rolled,, Ducked under, backed off, bobbed slipped and weaved with disgusting ease. Fuji fell down at least twice because he missed so badly.

By round 9 Fuji was so worn down from missing that Locche had turned the tables to display some beautiful down in the trenches inside fighting. He was sweet on the outside, sour up close.

Between rounds Fuji paws at his eyes as his trainers call off the fight. Locche didn’t lose the title for 4 years. 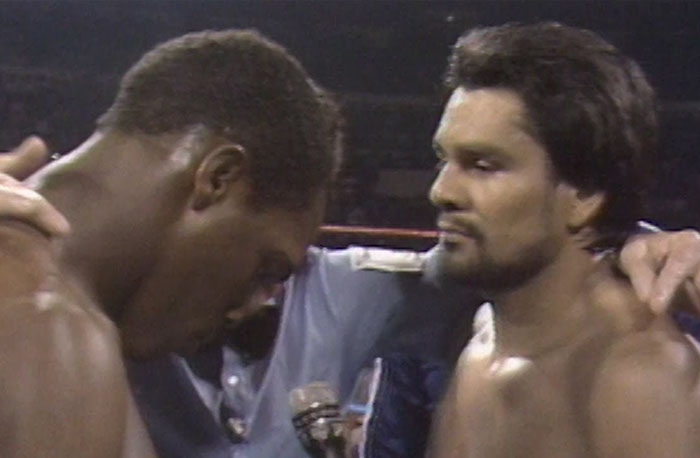 It was Roberto’s 32nd birthday and it seemed to be all down hill. 32 is middle aged in fight years. 2-2 in his last 4. A losing effort against Wilfred Benitez in his new weight class of 154lbs looked like Duran had reached his peak all those years ago in the legendary Brawl in Montreal. This lead to the infamous No Mas quit job in the rematch. Duran hadn’t looked the same since making his 3rd jump in weight. Now in Madison Sqaure Garden, the former lightweight was in Davey Moore’s home. The New York native had his wife and mother sitting ringside for his 3rd defense of his WBA title as a nearly 3-1 favorite.

So Davey Moore’s wife and mother were sitting ringside for one of the most legendary beatings in the history of the sport. Davey showed up expecting to bully the former lightweight. Duran fought like a honey badger. As you know, honey badger didn’t give a shit. Unlike our two previous victors, Duran was a swarmer. He came forward, so when Moore tried to impose his size and power, Duran simply imposed his skills. Duran got his forehead into the chest of the bigger man, used superior leverage to keep him on the back foot and utterly smashed his body with beautiful counters.

It was allowed to go on far, far longer than was needed. Duran was giving up 20 lbs but still hit hard enough to knock the mouthpiece Davey’s teeth. It should have ended here. It didn’t.
Davey got stretchered out and Roberto reclaimed his place as one of the greatest fighters ever to live. During the post fight interview Madison Square Garden sang him happy birthday, as a 16 year old Mike Tyson was shadow boxing in the gallery cheering for his demonic idol. 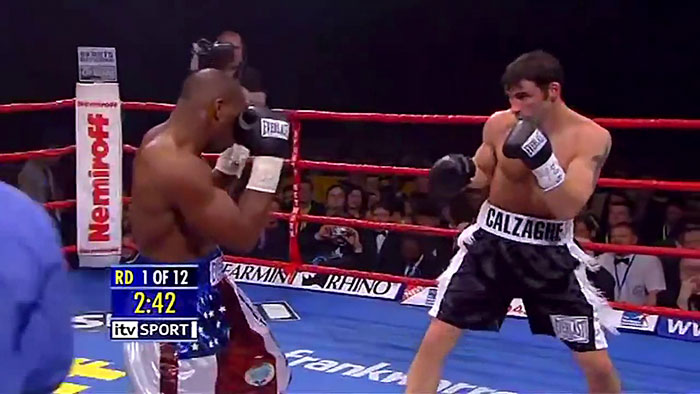 Joe Calzaghe was a long time 168lb champion from the UK who had a hard time making the fights with American stars like Bernard Hopkins and Roy Jones jr. The first American to test the mettle of the Welshman was up and coming KO artist Jeff Lacy.
Joe was a good left handed puncher in his early career but a series of broken hands forced him to change his style. In fact coming into the fight Joe had a wrist injury and had to be convinced to go through with it. Since Joe couldn’t use the traditional knuckles to punch, he adapted. He started using his “door knocker” knuckles to land his punches. Lacy landed one good left hook early. That was about all. Joe knew by round 2 this was his night.

The look on the face of Jeff Lacy at the end of round 3 as he sits in his corner, having been punched in the face 100 times in 10 minutes, is a gamut of emotions. It’s watching a person realize in real time they’re out of their goddamn depth. It’s watching a man experience ego death then realize at this rate he’d be lucky to get away with only his ego dead.

It could have been stopped at literally any point past round 5 with no complaints. But nobody would save Jeff Lacy, least of all himself. Lacy fought like a soldier going over the high side of some World War 1 trench. Every round he got off his stool he knew he was going to get machine gunned. Jeff did his duty. Made the final bell. Never looked the same afterward.

Nobody had more fun boxing than Emmanuel Augustus. His bizarre style was inspired by Eddie Gordo from the Tekken series and what ever album he put on in his mind between rounds. The early going was some what close because Ray Olivera had a borderline suicidal commitment to throwing punches. He was invovled in the record holder for the fight with most punches thrown. combining with Zack Padilla to break 3000 punches in 12 rounds. Despite this constant pressure of Olivera, Augustus got comfortable.

Comfortable Emmanuel Augustus was not just one of the finest showman in boxing history, he could brawl out with the very best. Using his outlandish dance like antics to hide some brilliant technique. In a sport full of sweet scientists, Augustus was an artist. Because science is repeatable. Good luck trying to find a sparring partner to mimic this horseshit.

There is always a tendency in boxing to look down on a showboat. Emmanuel Augustus was the exception. Because he wasn’t just a showboat. He enjoyed fighting in such an infectious way. Ray Olivera threw over 100 punches in every single round, and he didn’t win a one of them. While Emmanuel August stood with his back to the corner, a prolific volume puncher boring in on him and look and just look at him.

The fight was one of the most beautiful displays of the joy of boxing. It took a turn though. From nowhere Ray clutches at his neck and stumbles from nowhere. The ref asks the doctor to look at him and Ray inists he wants to fight. The doc cleared him against the better judgement of almost everyone else. Augustus was obviously uncomfortable with the fight continuing. When Ray rolls and grabs at his neck again Augustus refuses to hit him to the head. Olivera was screaming in pain, wailing away. Augustus shelled up and only threw token body punches, not wanting to possibly hurt Ray any worse.

The fight was stopped between rounds. With the referee calling it off on a hunch which proved to be spot on. Ray would get an X-ray that night which revealed a pinched nerve in his spine. An injury which forced him to retire. If it was any other fighter in the ring who knows if Ray Olivera is walking today. Augustus proves a great fighter can also be a good man.