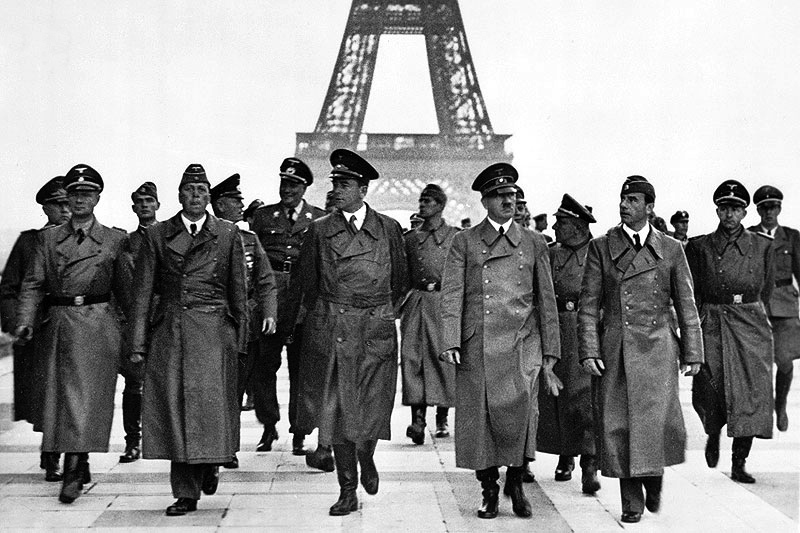 Yes. In fact, in the 1939-40 war against the original allies of France, Poland and Great Britain, Germany did win.

Today, we see these victories as inevitabilities. To the world in 1940, they were nothing short of unimaginable. These victories are not just tactical:

– Austria, Bohemia and Poland are now part of Greater Germany.
– France and the Treaty of Versailles are neutralized.
– The British, Hitler believes, are finished and will soon negotiate.

But the British don’t act as he thinks they should. They don’t negotiate after Dunkirk. While many of Great Britain’s leaders seek a negotiated agreement–actually, almost all of them— Prime Minister Churchill fights on.*

Hitler long had dreams of colonizing Eastern Europe and providing living space for the German people. But there are greater geopolitical considerations contributing to his decision:

1 – Hitler hopes the USSR’s defeat will force Britain to the negotiating table.

2 – Hitler’s fear (as expressed in his Zweites Buch) is the threat posed by the ‘American Union’. In multiple table talks, Hitler alludes to the potential danger of a US-UK-USSR coalition. He knows Germany will lose such a fight (even though he fails to realize America’s industrial ability.)

By speedily defeating the USSR in a surprise attack, Hitler hopes he can negotiate with Britain then rally his new Europe for the long-term battle against America (the final step of his unwritten ‘Stufenplan’). He may consider the “Judeo-Bolshevik” Soviet Union his most pressing enemy, but he considers America to be Germany’s greatest long-term threat.

But Hitler’s plans are botched because:

1. Hitler wastes time saving Mussolini’s failed campaigns in North Africa and South Europe. Instead of Spring 1941, Barbarossa is launched in late June. Precious time and resources are wasted in what amount to distractions.

2. Hitler fails to consult the Japanese on the invasion of Russia. The million-man, highly regarded Kwantung Army does nothing in support of Operation Barbarossa. Hitler fails to consult the Japanese, even though Japan has a long history of territorial ambitions in Siberia; even though Japan needs natural resources which Siberia has in abundance; and even though Hitler later declares war on the United States in hope that Japan will return the favor by attacking Russia.

3. Hitler never solidifies Operation Barbarossa’s strategy for success. Originally, Barbarossa’s central plan is defeating the Red Army. Then, it is the capture of Leningrad. Then, the capture of Moscow. Constantly Hitler’s personal interference foils the Wehrmacht’s operational abilities. Without a real strategy, the military wastes precious time transferring units from one front to another based solely on Hitler’s personal anxiety.

And in 1943, FDR, Churchill and Stalin meet in Tehran. Stalin toasts the occasion: “To American production, without which this war would have been lost”.

What Would The World Be Like If Nazi Germany Had Won WW2?What Life Was Like Under Nazi Occupation?What Would Happen if The US Shrunk Its Military and Forced…What was Hitler's last day on Earth like?How Did Germany De-Radicalize Its People After The Fall of…How Did Germany Defeat France So Easily In WW2?