Cheyenne “Pepper” Hanson, 23, clashed heads with opponent Alina Zaitseva from Ukraine on Saturday. And her face dramatically swelled up into a massive hematoma, forcing the fight to be called off.

END_OF_DOCUMENT_TOKEN_TO_BE_REPLACED A Brazilian footballer staged his whole career for 24 years – he could barely kick a ball. One time he was forced to play as the team had no strikers. He was worried he would get exposed, so before the game he started a fight with a fan and as a result got sent off before the game even started

He returned to Brazil and started a career as a farce footballer since he “wanted to be a footballer, but did not want to play football”, becoming friends of many footballers so that he could have a big network to be recommended whenever he needed a new club. With a physical shape similar to professional footballers, but lacking skills, his fraud consisted of signing a short contract and stating that he was lacking match fitness so that he would spend the first weeks only with physical training where he could shine. At the time he went to train with other players, he would feign a hamstring injury and, by the lack of technology at the time, it was difficult to discover that it was a fake injury. He had a dentist to claim that he had focal infection whenever any club wanted to go further in the case. By doing these steps, he went on to stay a few months at the clubs just training and without ever exposing that he was a fraud footballer.

END_OF_DOCUMENT_TOKEN_TO_BE_REPLACED This LeBron James rookie card sold for $1.8 million, the record for a modern day card.

It’s the most expensive basketball card ever purchased and the priciest trading card of any kind in the modern era (since 1980).

END_OF_DOCUMENT_TOKEN_TO_BE_REPLACED “The Most Perfectly Developed Man in the World” – 1906

On January 16, 1904, the first large-scale bodybuilding competition in America took place at Madison Square Garden in New York City. The competition was promoted by Bernarr Macfadden, the publisher of the original bodybuilding magazines such as Health & Strength. The winner was Al Treloar, who was declared “The Most Perfectly Developed Man in the World”.

END_OF_DOCUMENT_TOKEN_TO_BE_REPLACED He earned his bachelor’s degree in Exercise Science in just 2 1/2 years, he earned one of the 32 Rhodes Scholarships awarded every year, and he took a year off from football after the 2008 season to study at Oxford University and earn a Masters of Science Degree in Medical Anthropology. Selected by the Titans in the sixth round of the 2010 draft. In 2017, Rolle was accepted into the Harvard Medical School neurosurgery program. 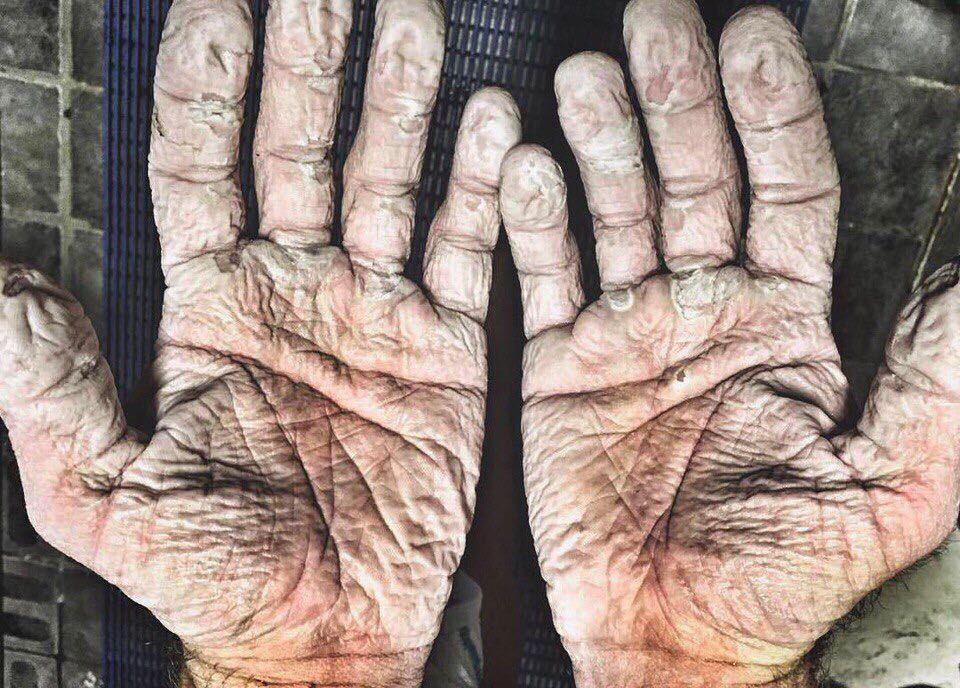 Two-time Olympic rowing champion Alex Gregory posted a photo of his hands after a 12-day rowing boat trip across the Arctic Ocean.

Gregory, a two-time Olympic gold medalist and five-time world champion, incurred his horrific injuries while taking part in a charity rowing expedition in the Arctic Ocean. I’m so BLOODY EXCITED FOR WORLD CHAMPIONSHIPS. Last practice in the US and I’m leaving for acclimation camp with 15 stitches. We good though. I’m just trying to be even more intimidating. Ready or not, world, here I comeeeee (Instagram)

This is Rhea Bullos, she’s 11 and couldn’t afford to buy sport shoes to compete, so she covered her feet with plaster bandages and drew Nike logo on them. She won 3 gold medals (400, 800 and 1500m) Rohskopf’s coach, Robert Drysdale defended his decision to urge his fighter to push through. That’s because the renowned trainer knew that come Monday morning, Rohskopf would regret quitting … which he already does.

END_OF_DOCUMENT_TOKEN_TO_BE_REPLACED NASCAR drivers rally around Bubba Wallace at Talladega: “We want to stand with our friend”

Showing their support after reports surfaced that a noose was found in Bubba Wallace’s garage at Talladega Superspeedway on Sunday — the NASCAR family showed up. Drivers and pit crews lined up and pushed Bubba’s No. 43 Chevrolet to the front of the starting grid prior to the race.