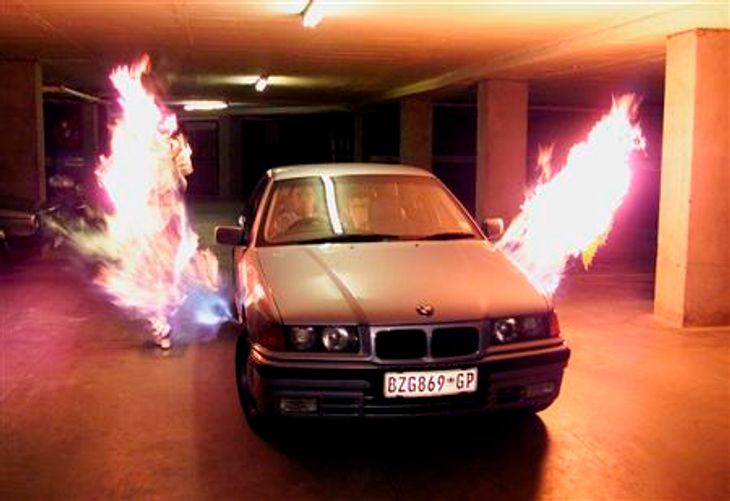 This system was designed to combat car jacking by shooting a jet of flames at anyone standing next to either side of the car.

When this foot switch is pressed, two things happen. One, a 14-thousand volt spark would appear here in this nozzle, and then you have these four jets here shooting out gas. Liquid gas from the gas bottle in the boot. Liquid gas, as soon as it exits over the spark here, will ignite and a ball of flame will shoot out of both side of the vehicle. Incapacitating the hijackers immediately.”

Amazingly perhaps, the system’s legal in South Africa – provided the driver is acting in self defence as depicted in this mock-up.

END_OF_DOCUMENT_TOKEN_TO_BE_REPLACED The Interior of The Singer Williams DLS Porsche

The DLS started life as your average 1990 Porsche 964-generation 911. The project was commissioned by a Singer client who asked the company for something that’s not only wickedly fast, but also a car that would take lightweighting more seriously than anything Singer has ever built. For that, Singer leaned on its technical partner in the United Kingdom, Williams Advanced Engineering — part of the Formula 1 group.

END_OF_DOCUMENT_TOKEN_TO_BE_REPLACED

In China, it appears that KFC has started deploying 5G autonomous vehicles which allow customers to purchase their finger licking good meals without human interaction.

The unmanned vehicles were spotted in front of a metro station outside the city of Shanghai. From the looks of it, you can place an order on the screen and it accepts payment via QR-code. After payment is made, the door will open for you to collect your order.

The vehicles are from Neolix and it appears to be identical to the 5G-connected vehicles that are used in hospitals in Thailand for contactless delivery of medical supplies.